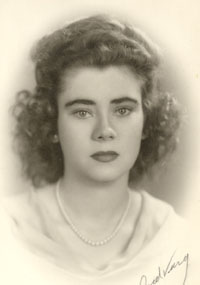 Winifred C. Scheberle, born Katherine Mary Winifred Carey, in La Junta, Colo., on Aug. 5, 1920, passed away Sept. 30, 2006, in Pueblo, Colo. Winifred's parents were Winifred Gannon and J. Vincent Carey. Educated in La Junta schools and Barnes Business college. She worked for La Junta businesses, Otero Savings & Loan, Roath Jewelry and was secretary to the base personnel officer at La Junta Army Corps Base. She met her future husband, Leo Scheberle, a B-25 flight instructor at the La Junta Air Base in 1943, later marrying in 1946 They lived in Pueblo, Colo. , from 1946 until 1963, then moved to Denver, where she was a homemaker and worked in sales at Suzanne Helzer's Deer Dancer Native American shop in Larimer Square. Her youngest son, Gregory, died in 1980. She is survived by Leo, her husband of 60 years, and son, Carey (Christine) Scheberle of Pueblo West; cousins, Bob Parish of Denver, Sister Laurus and Sister Charla, both of Chicago, Ill; and grandchildren, Matthew Scheberle of Ft. Collins, Colo., Jodi Scheberle of Denver, Geoffrey Scheberle of Salida, Colo., Daniel Archuleta and Lydia Archuleta, both of Ft. Collins. She had a lifelong fascination with the art and history of the southwest, traveling, oil painting and was an accomplished artist. Winifred enjoyed being with people, cooking, collecting recipes, crafts and perusing antique stores with her girlfriends. She spent may hours with the women in church affairs. She moved back to Pueblo in 2001 to be near family. Her family appreciates the work of caregivers at University Park Care Center during her brief illness. Rosary will be held 6 p.m. Thursday in the Montgomery & Steward Chapel, in Pueblo. Funeral Mass will be held 10 a.m. Friday, Oct. 6, 2006, at St. Pius X Church, 3130 Morris Ave., in Pueblo, with the Reverend Fr. William Huber as celebrant. Private interment, Fairview Cemetery, La Junta, Colo. The family respectfully request the omission of food and flowers. Memorials may be made to Eternal Word Television Network (ETWN) through Montgomery & Steward Funeral Directors, 1317 N. Main St., Pueblo, Colo. 81003. Online condolences, www.MontgomerysSteward.com