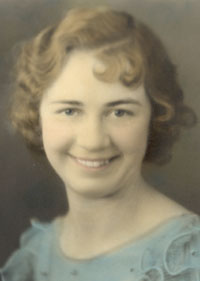 Wilma Ketchum, 90, passed away May 17, 2007. Survived by her daughter, Kay (John) Toth of Pueblo; grandchildren, Michael (Peggy) Toth of Houston and Kevin (Vicky) Toth of Pueblo; niece, May Waggoner of Houston; great nephews, Tom and Jim Waggoner; and special friends, Thelma Toth, Jane Gray and Genevieve Buffalow. Preceded in death by her parents, Charles and Bertha Milligan; and brother and sister-in-law, Charles O. and Naomi Milligan. Wilma was born Dec. 9, 1916, in Salt Lake City, Utah. She worked as a repair clerk for the phone company and was a member of Telephone Pioneers. She was also a lifetime member of First United Methodist Church and past matron and life member of O.E.S. #7.There will be no viewing. Cremation, Montgomery & Steward Crematorium. Memorial service, 1 p.m. Thursday, May 24, 2007, at First United Methodist Church, 11th and Court, with the Reverend Dr. Rick Calhoun officiating; concluding with the Eastern Star Service by O.E.S. # 7. In lieu of flowers, memorials may be made to First United Methodist Church. Online condolences, MontgomerySteward.com