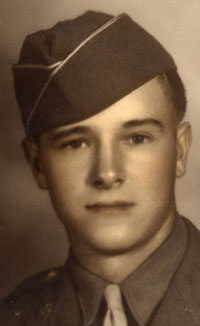 William A. Bratina, 80, born on December 12, 1923, and reborn in the mystery of life on the first day of Spring, March 20, 2004, surrounded by his family. Preceded in death by his parents, Steven and Rosa; his brothers, Steve and John; and his daughter, Rosanne. Survived by his brothers and sisters, Mary Keller, Ed (Julia) Bratina, Liz (Norman) Young, Anna Papish, and Stanley Bratina; his children, Elizabeth (John) Patterson, Will (Suzanne) Bratina, David (Robin) Bratina, Dan (Jeanine) Bratina, and numerous grandchildren, nieces and nephews. A 1942 graduate of Pueblo Catholic High, he served in the U.S. Army in the Pacific Theatre during WWII, sacrificing the innocence of his youth for the freedoms of our nation. He retired from the Post Office in 1984. The family would like to extend its gratitude to the wonderful staffs of Pueblo Extended Care Center and the Wound Care Center at Saint Mary Corwin Hospital. Vigil service, 6 p.m. Wednesday and Funeral Mass, 10 a.m. Thursday with the Rev. Father John Farley as celebrant. Both services at St. Mary Church, 307 E. Mesa, in Pueblo, Colorado. Military Honors by Pueblo Veterans' Ritual Team and interment at Roselawn Cemetery. Reception to follow interment at 104 Brentwood. Online condolences, www.montgomerysteward.com