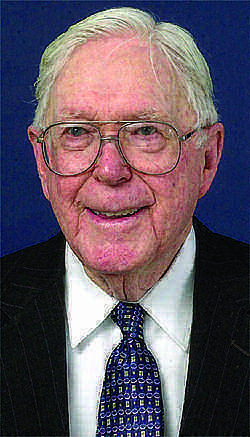 Thomas V. Healy was born July 19, 1912, in Denver, Colo., son of John Francis Healy and Kathleen Galligan. His father was the long-time fire chief of Denver. Tom passed away May 6, 2009, in Pueblo, Colo. Tom was educated at Regis High School in Denver and the University of Colorado, Boulder. After serving with the Army-Air Corps during World War II and marrying Joanne Daily of Pueblo, Tom moved to Pueblo permanently. After working in real estate sales with the Leach Company, Tom purchased an interest in the Sam Jones Agency from Mike Littell in 1952. In 1963 the company relocated from the basement of the Thatcher Building to its current location at 119 Sixth Street. Then in 1967, the company changed its name to Jones-Healy, Inc. The company. recently celebrated its 75 Year Anniversary of continuous operation. Tom had a continuous career of service to his chosen profession. Milestones were organizing member of the Pueblo Multiple Listing Service, 1952; President of the Pueblo Board of Realtors, 1953; Realtor of the Year 1959; inducted into the Pueblo Hall of Fame, 2001; Lifetime Achievement Award, 2002; and a member of the Colorado Real Estate Commission from 1988 to 1996. Tom retired in 1999 from Jones-Healy, Inc. at the age of 86. Business activities included Developer of Sunset Plaza, Belmont shopping center, and University Station shopping center and numerous other properties. Participating broker for the sale of ranch property to McCulloch Properties which later became the community of Pueblo West. Tom was broker for the sale of 16, 000-acre Lester Lawhorn Ranch near Fowler to movie legend Gene Autry and rodeo promoter Harry Knight. Active as an Official Greeter at the State Fair, Tom was instrumental in organizing the annual Parade through downtown and in launching the State Fair Train from Denver. His love for horses led him to a hobby as a quarter horse breeder and cutting horse enthusiast. Tom was also a member of Pueblo Rotary 43. Tom also devoted himself to activities with Pueblo's institutions of higher education. He was an Emertus Member of the Pueblo Community College Foundation, 1999 to 2009. Member of the University of Colorado School of Business Alumni Advisory Council 1966 to 1970. Founding Member of the Business School Advisory Board, CSU-Pueblo, where he served from 1997 to 2007. Tom was also instrumental in the creation of the Healy Center for Business and Economic Studies at CSU-Pueblo Preceded in death his parents, John F. and Kathleen Healy; his wives, Joanne (Daily) Healy and June (Neary) Sarconi; his father-in-law, James M. (Josephine) Daily; sister, Katherine (Andrew) Dooner; brother, John F. (Fran) Healy; and sister-in-law, Geraldine (Bill) Fortune. Surviving Healy family relatives include his son, Mike (Angela) Healy of Pueblo; grandson, James (Lori) Pearson of Pueblo; nephew, James Fortune of Beulah; niece, Patti (Ken) Zimmerman of Pueblo; niece, Joanne (Nick) Sesson of Englewood; and cousin, Jeanne (Col. James D) Bates of Pueblo. Surviving Sarconi family relatives include step-son, Tom Sarconi of Pueblo West; step-daughter, Judy Ashton; step-grandchildren, Diane (Mike) Case of Arvada and Bill (Shelby) Frankmore of Reno, Nev.; as well as numerous members of the extended family. There will be no viewing. Funeral Mass, 10 a.m. Monday, May 11, 2009, at Shrine of St. Therese, 300 Goodnight Ave., with the Reverend Father Liam Courtney as celebrant. Interment will follow at Roselawn Cemetery. In lieu of food and flowers, memorials may be made to the Alzheimers Association or Sangre de Cristo Hospice, through Montgomery & Steward Funeral Directors, 1317 N. Main St., Pueblo, Colo. 81003. Online condolences, www.montgomerysteward.com