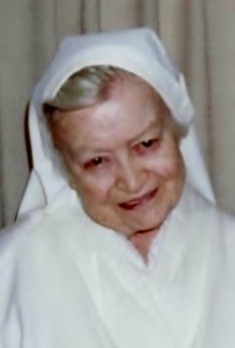 Sister Mary Michael Gannon, SSS (Mary Gannon) was born in New York City, Aug. 26, 1915. She was a resident of Life Care Center, Pueblo, Colo., at the time of her death on June 21, 2014. Sister Mary Michael received her MA from Fordham University, New York City, and was employed by the Eymard League of the Fathers and Brothers of the Blessed Sacrament prior to entering the convent. She entered the Congregation of the Servants of the Blessed Sacrament May 2, 1953, making Final Profession Nov. 21, 1958. She served as Provincial Treasurer and in various other capacities in the convents of Waterville, Maine, and Pueblo, Colo. Sister Mary Michael is survived by her Sisters in Community. Mass of the Resurrection, 10 a.m. Thursday, June 26, 2014, at St. Mary Catholic Church, 307 E. Mesa Ave., with Fr. Joseph Vigil as celebrant. Interment, Imperial Memorial Gardens. Special thanks to Life Care Center and Frontier Hospice for the care they gave Sister Mary Michael. Online condolences, www.montgomerysteward.com