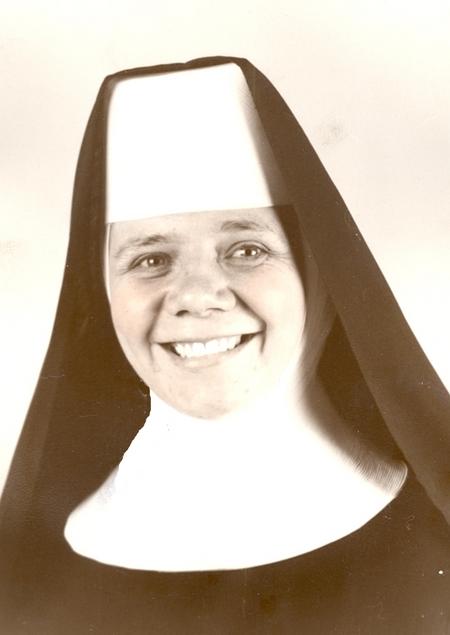 Sister Mary Hugh Peterson, 89, died peacefully in her sleep with her dear friend, Sherry Koski, by her side at the Sangre de Cristo Hospice in Pueblo. She was born in San Acacio, Colo. on March 26, 1922, to Joseph and Margaret (Tighe) Peterson. She was baptized under the name of Josephine Margaret Peterson, the third of four siblings. She attended elementary school in San Acacio and graduated from Antonito High School in 1940. She entered the Benedictine Community of nuns on June 14, 1940, at Mt. St. Scholastica Convent in Atchison, Kansas. She received the habit on Dec. 13, 1940, and was given the name of Sister Mary Hugh. She made first vows on Jan. 1, 1946. She taught in elementary schools in Nebraska, Kansas and Missouri. In 1958, she returned to Colorado and taught in Walsenburg, Antonito, Monte Vista, and Pueblo at the Cathedral. She earned her bachelor's degree at Mt. St. Scholastica and her Masters degree in Art at Adams State College, Alamosa, Colo. After one year in Canon City, she decided to leave the teaching profession and became the religious coordinator at the shrine of St. Therese in Pueblo, Colo. She retired from this position in 1986, spent one year at Benet Hill Monastery and the next year in Castle Rock, Colo. She was a charter member of Benet Hill in Colorado Springs. Sister returned to Pueblo in 1988 and for five years worked in the Pastoral Ministry by visiting the sick and elderly in Pius X Parish. She retired from this position and cared for an elderly friend until her friend's death. She and her sister, Sister Mary Clare Peterson retired and bought a home in Pueblo where they lived until her sister passed away. In 2005, she moved to the Richmond Apartments in Pueblo. She was a member of Our Lady of Knock Legion of Mary at the Shrine of St. Therese. Her survivors are her brother, Tom (Kate) Peterson; nephews and nieces James, Thomas, Karen, Kathy and Theresa of Long Island, New York. She is also survived by her nephew, Mike (Lorena) Peterson of Manassa, Colo, Mary Ellen (Craig) Williamson of Seward, Alaska, Jean (Delbert) Lorenz and Joan (Jerry) Lorenz both of San Acacio, Colo. She also has numerous grandnieces and nephews and great-grandnieces and nephews. Sister was a person who loved people. She made many friends wherever she lived and often referred to herself as the 'Vagabond Nun.' because she had lived in so many places. She had a wonderful sense of humor and an infectious laugh. She was an artist and sent friends and family lovely homemade Christmas cards each year. She loved and served the Lord for 71 years as a Benedictine nun and touched many peoples' lives. Well done, good and faithful servant. Funeral Mass, 10 a.m. Saturday, Nov. 5, 2011, at Shrine of St. Therese, 300 Goodnight Ave., in Pueblo, with the Most Reverend Fernando Isern, D.D. and the Rev. Msgr. Edward Nunez concelebrating. She will be buried in the Catholic Cemetery in San Luis, Colo. beside her beloved sister, Sister Mary Clare Peterson at 11 a.m. on Monday, Nov. 7, 2011. In lieu of flowers, memorials may be made to Sangre de Cristo Hospice or Shrine of St. Therese through Montgomery & Steward Funeral Directors, 1317 N. Main St., Pueblo, CO 81003. Online condolences, www.montgomerysteward.com