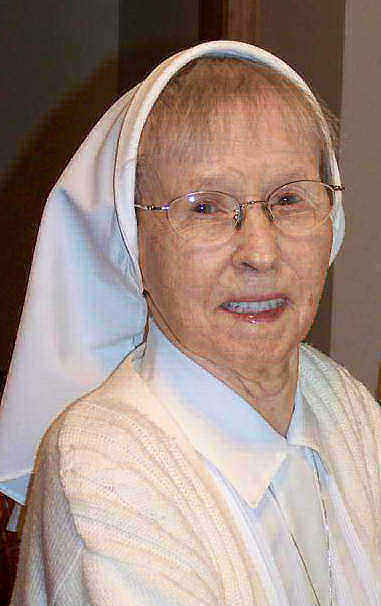 Sister Lorraine Marie Needham, SSS, 92, passed from this life April 10, 2011, at Life Care Center, Pueblo. She was born Frances Lorraine Needham August 7, 1918, to John J. and Mary Stella (Seney) Needham in Port Alice, Vancouver Island, British Columbia. On August 1, 1939, she entered the novitiate of the Sisters of St. Ann, Victoria, BC. She taught for 12 years in Vancouver, New Westminster, Nanaimo, and three years in Alaska. She transferred to the Servants of the Blessed Sacrament November 19, 1951, in Quebec, Canada. She came to Waterville, Maine in 1953 and then to Pueblo, Colo. July 1, 1956, for the new foundation. There were many moves following this, in the United States and Canada. She was preceded in death by her parents; two brothers, Jack and Gerard Needham; and a sister, Bernice Richmond. She is survived by one brother, Dallas (Pat) Needham of Ladysmith, BC, and nieces and nephews. Viewing , 9:30 a.m., followed by the Recitation of the Rosary at 10:15 a.m. and Mass of the Resurrection will be celebrated at 11 a.m. Thursday, April 14, 2011, at St. Mary Help of Christians Church, 217 E. Mesa. Light refreshments will be served following the Mass. Interment, 10 a.m. Friday at Imperial Memorial Gardens. In lieu of flowers, memorial donations may be made to the Servants of the Blessed Sacrament, Pueblo, in care of Montgomery & Steward Funeral Directors, 1317 N. Main St., Pueblo, CO 81003. Online condolences, MontgomerySteward.com