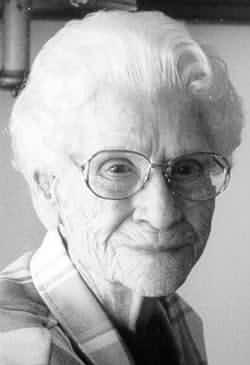 Ruth Dale Duncan Middleton, 100, passed away November 7, 2000, in Pueblo. She was born March 22, 1900, in Saline County Kansas on a farm near the towns of Salina and Gypsum, Kansas. Her parents homesteaded the last quarter section of land in Kansas under the Homestead Act in 1902 and Ruth lived there with her family until she came to Burlington, Colorado to teach music and physical education in 1924. In 1926, she married Carl G. Duncan, a teacher and administrator. To them were born four children three of whom survive Ruth: JoAnn (Bud) Kincaide of Long View, Texas, Carl (Joan) Duncan of Littleton, Colorado and Earl (Betty) Duncan of Longmont, Colorado. Carl G. Duncan preceded her in death in 1974. Ruth was also preceded in death by her daughter, Lois Collins and sister, Eleanor O'Dell. In 1981, she was married to Donald S. Middleton who preceded Ruth in death on March 21, 1995. Ruth is survived by her step-daughters, Roberta Jean (Henry) Hanna of Cloquet, Minnesota, Mary (Kenneth) Ray of Arvada, Colorado, Linda (Alan) Thompson of Waukesha, Wisconsin and Betsy Towell of Brookfield, Wisconsin. Other survivors include her sister, Eula Hoover of Pueblo; 15 grandchildren and 28 great-grandchildren. Before coming to Colorado she taught five years in elementary schools in Kansas, two years at Burlington, Colorado and twenty-four years in Pueblo County District No. 70 at Avondale, Colorado, serving as elementary principal of the Avondale School for thirteen years. Other activities include, past president of the American Legion Auxiliaries of Cortez, Colorado and of Oak Creek, Colorado, past president of Federated Women's Clubs in both Cortez and Oak Creek. Member of No. 132 Wild Rose Chapter of O.E.S. for over fifty years, present member of P.E.O. Chapter BT. and past president of the Monday Music Club. Mrs. Middleton was an accomplished musician. She served as the organist for various churches in Colorado Springs from 1965 to 1973. More recently she served as organist for five and one half years at Westminster Presbyterian Church in Pueblo. Funeral service will be held 2 p.m. Saturday, November 11, 2000, at Westminster Presbyterian Church, 10 University Cir., with Rev. Pat Hurley officiating. Interment, Roselawn Cemetery. The family will receive friends at Avondale Methodist Church, 227 E. Hwy 50, following the interment. Those who desire, may make memorials to Westminster Presbyterian Church or to a charity of choice through the funeral home.