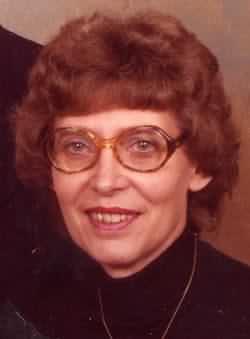 Roberta Jean 'Bobbie' Geringer, 75, passed away May 9, 2003. Survived by her daughter, Kristeen (Vick) Medina, Beulah; grandchildren, Casey and Cody Medina; sisters-in-law, Barbara (Don) Shipler, Silver Cliff, Mollie Wilken, Henderson, Nevada, Tillie Mehle, Pueblo, Ilene Matteson, Littleton, Helen (Robert) Aggson, and Midge (Tom) Montgomery, both of Pueblo; brother-in-law, Ted Geringer, Lamar; numerous special nieces and nephews, including Kathy Eberling of Pueblo; numerous great and great-great nieces and nephews; and a host of cousins, including Joanne (Walt) Dehn. Also survived by special friends, Joe and Patty Schiro of Loveland, and Geri & Jim Elson. Preceded in death by her husband, Harry E. Geringer on August 13, 2001; sisters, Rita (Harold) Williams, Ruth (Troy) Ellis, and her brother, Walter Eberling. Bobbie was born on September 20, 1927, to Walter A. and Frances M. Eberling, in Denver and was a longtime Pueblo resident, graduating from Centennial High School. She was a bookbinder at Riverside Printing Company for many years. She and her husband later bought the business from her friends, Fern and the late Al Cossel and renamed it The Book Bindery, which they operated until their retirement. At her request, there will be no viewing. Recitation of the Rosary will be held at 7 p.m. Monday, May 12, 2003, and Funeral Mass, 10 a.m. Tuesday, May 13, 2003. Both services at Our Lady of the Meadows, 23 Starling Drive, with the Reverend Father Mike DeSciose as celebrant. Committal will follow at the Mountain View Chapel Mausoleum. Those who desire may make memorials to Lupus Foundation, through the funeral home.