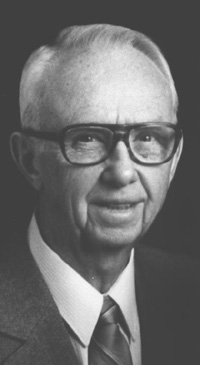 Robert M. Crosby, 89. This very kind and gentle man passed away on April 10, 2006. Bob was completely devoted to his wife, Lena, his children and grandchildren, and he was a most loyal friend and neighbor. He was born in West Mineral, Kansas on August 25, 1916, to Frank and Pearl Crosby. The family moved to Cañon City, Colorado in 1926. It was there he met his wife of 63 years, Lena, who preceded him in death two years ago. Their devoted children, Leanna Crosby of Tucson, Arizona and Roger (Louise) Crosby of Centennial, Colorado and their grandchildren, Amanda of Denver, Colorado and David of Sacramento, California, survive him. His parents and his two brothers preceded him in death. His sister, June, lives in Grants Pass, Oregon. Bob was in the grocery business for nearly 50 years and loved to entertain his friends and strangers showing off his 'old grocery collection' in his little museum behind their home. Bob made friends easily and kept them for life. For the last year of his life, Bob lived in Heritage Club Assisted Living in Englewood, Colorado where he continued to help others less able than he. Bob and Lena were active members of the First United Methodist Church since 1948, and they devoted many hours to helping others in their time of need. Viewing from 1 to 7 p.m. Friday at Montgomery & Steward Funeral Directors. The funeral service will be held at 9:30 a.m. Saturday, April 15, 2006, at First United Methodist Church, 310 West 11th, with the Rev. Dr. Rick Calhoun officiating. Interment will follow at Lakeside Cemetery, Cañon City, Colorado. In lieu of flowers, contributions in his memory may be made to the First United Methodist Church designated for United Methodist Women or the Sangre de Cristo Hospice, through Montgomery & Steward Funeral Directors, 1317 N. Main St., Pueblo, Colo. 81003. Online condolences, www.montgomerysteward.com