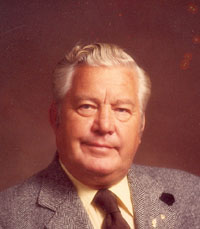 Robert Lee Foos, 79, passed away April 30, 2007, in Pueblo. Survived by his wife of 61 years, Betty Foos of the family home; children, Sharon (Rick) Hackenberg of Thornton, Colo., Richard (Peggy) Foos of San Diego, Calif., Jeffery (Cindy) Foos of Camarillo, Calif.; sister, Caroline Pelton of Greeley, Colo. He is also survived by, six grandchildren; and nine great grandchildren; numerous nieces and nephews; and his buddy Chooie. Robert is preceded in death by, his parents; brothers, Larry and John Foos; and his sister, Betty Segelke. He was born on Jun. 12, 1927, in Brush, Colo. to Emanuel and Edith Foos. At his request there will be no viewing. Memorial Service will be held 2 p.m. on Saturday May 5, 2007, in the Montgomery & Steward Funeral Chapel, 1317 N. Main, Pueblo, Colo. with the Reverend Dr. Rick Calhoun officiating. In lieu of food and flowers, memorials may be made to the American Cancer Society through the funeral home office.