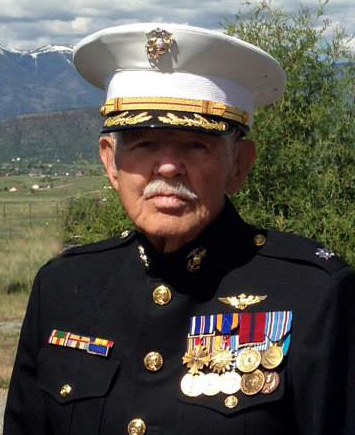 Lt. Col. Robert L. Dahlberg – 10/21/25-7/2/16 Robert 'Bob' Dahlberg was born in St. Paul, Minn. on Oct. 21, 1925. His parents were Laurence and Esther Dahlberg, both first generation Americans born of Swedish immigrants. Bob attended Harding High School in St. Paul, Minn. He was 16 when the Japanese struck Pearl Harbor and he was accepted in the Naval Aviation Cadet program to become a pilot but the Navy waited for him until June when he graduated from high school. Bob's Marine career spanned both World War II and Korea. During WWII he was stationed at Ft. Lauderdale, El Toro MCAS, Honolulu, Midway Island, and Camp Pendleton. He flew carrier based F4 Corsair fighters. Between wars, he married Bernice Pritchard on Sept. 3, 1948, and received a degree in mathematics from the University of Minnesota. In 1950, he was activated for Korea and was stationed at Kimpo Airport just southwest of Seoul. In Korea, Bob flew the F7F Tigercat in close air support of ground troops including the Battle of the Chosin Reservoir. Bob received the Distinguished Flying Cross for displaying outstanding courage despite limited visibility caused by darkness, smoke, haze and hazardous terrain. At the request of a forward air controller he attacked enemy mortar positions which were holding up the advance of a Marine Infantry battalion in the mountainous terrain northeast of Uijongbu, Korea. During the identification of the target, Bob's aircraft was damaged when the rear canopy released. Being cognizant of the damage sustained, and realizing the ground unit's dire need of close air support, he persisted in his attacks until the enemy positions were completely destroyed, thereby allowing our troops to advance. Other notable missions during the Korean War included a low level flight across northeastern North Korea to see the extent of the MIG strength on three Russian airfields located around Vladivostok. Along with the Distinguished Flying Cross, he received various other Air Medals. After the war, Bob returned to his wife in St. Paul and worked for the Aeronautics Division of Honeywell Minneapolis and attended law school receiving his law degree from the St. Paul College of Law. He and Bernice settled in North Oaks, Minnesota and began a family. The years took them to Celina, Texas, Boulder, Colorado, and finally Rye, Colo. where they retired on the mountain land they loved. Preceded in death by his parents, Laurence and Esther Dahlberg; sister, Betty Lynch; son-in-law, Judson Beall; and too many old flying buddies and good friends to list. Survived by his wife, Bernice Pritchard Dahlberg; children, Lisa Beall (Judson-deceased), Kristopher Dahlberg (Shawnee), and Jennie Dahlberg Hill (Ivor); grandchildren, Kristopher 'Keith' Dahlberg (Alexandra), Kimberly Lynn Dahlberg, and Katherine Dahlberg MacLeod (Joshua); and the light of his life, great-granddaughter, Kerrigan Dahlberg MacLeod. Although the list of Bob's accomplishments and sacrifices for his country are extraordinary, he will be most remembered by family and friends for his immense generosity, quick sense of humor, excellent martinis, and undying love for his family. He made life better for everyone he met. Semper Fi. Service, 11 a.m. Monday, July 25, 2016, at Rye Methodist Church. Interment, Brookside Cemetery in Rye, Colo. Online condolences, www.MontgomerySteward.com