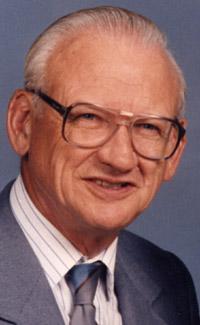 Robert 'Bob' Eugene Miller, 85, of Pueblo, Colorado, died on July 7, 2005. He was born in Wadena, Minnesota, on November 28, 1919, and is survived by his wife of 50 years, Zona; sons, Rick of Denver and Tim (Vickie) of Colorado Springs; sister, Mrs. Bonnie Blair, of Milwaukee, Wisconsin; and numerous nephews and nieces. Bob received his B.S. Degree in Chemistry from North Dakota State University in 1941. While doing graduate work he was hired by E.I. DuPont & Co. as a junior chemist to work at their TNT plant near Childersburg, AL. While employed there, he was selected, along with other chemists, to work on the RDX Project (later known as the Manhattan Project). Bob was transferred to the University of Chicago where he underwent training before being transferred to Clinton Laboratories (later known as the Oak Ridge National Laboratories), in Tennessee. He worked as a chemist there helping to solve the problem of separating plutonium from uranium. In 1944, he was transferred to the Hanford Engineer Works in Richland, WA, where plutonium was produced. In 1946, Bob left the project to continue his education. He was offered a position of lab assistant, and later instructor, at Iowa State University and working full time, obtained his M.S. Degree in Biophysical Chemistry in 1951. After a year at Northern Colorado State College in Greeley, Bob accepted a position in the Chemistry Department of Pueblo Junior College where he worked for 14 years and then 17 years at the USC campus (now CSU-Pueblo). Bob was Past-President of the Colorado-Wyoming Academy of Science and of the USC Retirees Association. He was also Past-President of the Pueblo Retired School Employees Association. He had been a member of the American Chemical Society for over 52 years. His hobbies were fishing, gardening, ham radio and Scout work. He started the first Scout Troop in Oak Ridge, TN. In Richland, he took over a Troop and the unit grew to over 45 Scouts. In 1980, Bob received the highest Council award in Scouting, the Silver Beaver. Besides Scouting, Bob was active in his church, St. Paul United Methodist. He sang in the choir and was a member of the Day Care Center Board and was Chairman of the Trustees. His wife and he bought a motor home when he retired and traveled through all the states (except Hawaii) and most of the Canadian provinces. They participated in several Elderhostels in Alaska, The Netherlands, Georgia, British Columbia, Washington and Montana. They also, on their own, visited the British Isles, New Zealand and Australia. There will be no viewing. Cremation, Montgomery & Steward Crematorium. A memorial service will be held 2 p.m. Monday, July 11, 2005, at St. Paul United Methodist Church, 107 E. Routt, with the Rev. Tom Peacock officiating. Those who desire may make memorial contributions to either St. Paul UMC or to St. Paul UMC Day Care Center, c/o the funeral home office. Online condolences, www.montgomerysteward.com