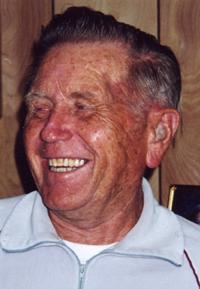 Robert A. 'Whitey' Smith, 75, of Pueblo, Colorado, lost his courageous battle with cancer on Sept. 13, 2004. Survived by his wife of 54 years, June; children, Rob (Kortney) Smith and Nancy Ferguson; and grandchildren, Clint and Jamie Ferguson, all of Pueblo. Preceded in death by his parents, Alexander and Lillian Smith; and brothers, Wallace and Donald Smith. Whitey was born March 2, 1929, in Lancol, Wyoming and married June Brelsford on Aug. 11, 1950, in Raton, N.M. He served in the U.S. Army during the Korean Conflict. Whitey worked for Alpha Beta Packing Co. for 32 years and for Colo. Dept. of Corrections as a correctional officer for 10 years. Friends and family knew him to be a kind and gentle man. In addition to being an avid fisherman, Broncos and Avalanche fan, Whitey loved nature and the wildlife in Rye. There will be no viewing. Cremation, Montgomery & Steward Crematorium. A private memorial service will be held at a later date. Online condolences, www.montgomerysteward.com