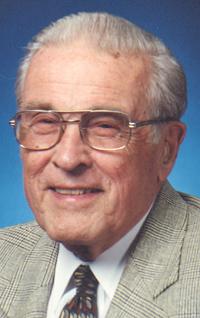 Richard L. ?Dick? Quigg passed away January 4, 2008. Survived by his wife of 61 years, Jean M. Quigg; son, Lewis M. Quigg and Lewis? wife, Kathy of Pueblo and Lewis and Kathy?s children, Cannon M. Quigg of Steamboat Springs, CO, Kelsey A. Quigg and Kelsey?s wife Jennifer of Aurora, CO and Amy A. Giuliano of Pueblo; son, J. Michael Quigg of Austin, TX and Michael?s son, Cameron M. Quigg of Ontario, Canada; and great-granddaughters, Reagan D. Quigg and Katie C. Cruz. Dick and Jean were married on April 8, 1945, in Bonham, TX. Preceded in death by his parents, Lewis F. Quigg and Nell Trent Quigg and sister, Helen Quigg Cronenberg. Dick was born May 30, 1919, in Johnstown, PA and was a longtime Pueblo resident, graduating from Pueblo Central High School. Dick was licensed to fly a plane before he was licensed to drive a car. He started and ran a flight school in New York while attending Cornell University. After graduating from Cornell University with a degree in geology, Dick taught in the Aviation Cadet Program in Texas and was commissioned in the Army Air Corps in 1943. Dick was an extraordinary pilot who served in the CBI Theatre, China Campaign, Central Burma and India-Burma Campaign, known as ?flying the Hump.? Dick flew at least 85 round trip missions over ?the Hump? and as a result of his flying was awarded the Distinguished Flying Cross with Oak Leaf Cluster, Air Medal and APT Ribbon with 3 stars. After his service in the military, Dick was an assistant manager of the refrigeration division of Salem Engineering, and also piloted their corporate planes, for 2 years. Dick returned to Pueblo and became a sales manager at Vidmar-Mathis Motor Co. for 6 years before he joined Max Day at the Max Day Insurance Agency as a partner and eventually became owner of the insurance agency where he worked until his retirement in 2002. Dick was actively involved in the Pueblo community. He served on the McClelland Children?s Home board of directors; president of the Pueblo Family YMCA?s board of directors; treasurer of the Presbyterian Towers Building Corp.; a member of Pueblo Rotary #43 and Pueblo Elks Lodge 90; member of the Pueblo of Commerce?s aviation committee and also The Chamber?s board of directors, president of the Pueblo Country Club (where he enjoyed many hours of golf and playing gin), a member of PEDCO and a member of First Presbyterian Church of Pueblo. Dick served on the School District 60 (now Pueblo City Schools) board of directors from 1967-79 and served 2 terms as the board?s president. He also served on the Colorado Association of School Boards? board of directors. Special thanks to friends and caregivers, Frank Davied and Chris Reid. Dick was an officer and a gentleman. There will be no viewing. Cremation has taken place. Memorial service, Friday, January 11, 2008, 1:30 p.m. at First Presbyterian Church, 10th & Court Streets, with the Reverend Dr. Brad Munroe officiating. In lieu of food and flowers, memorials may be made to Pueblo Family YMCA or Pueblo Child Advocacy Center, through Montgomery & Steward Funeral Directors, 1317 N. Main St., Pueblo, Colo. 81003. Online condolences, MontgomerySteward.com