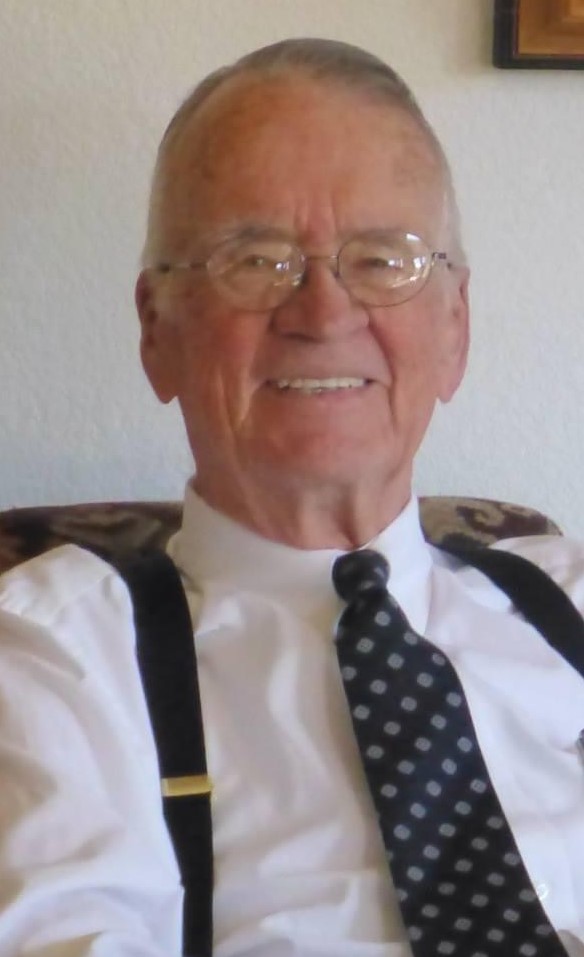 The Honorable Richard D. Robb, 91, retired Pueblo District Court Judge, passed away peacefully September 24, 2020 at Joni Fair Hospice in Pueblo, Colo. He was born March 20, 1929 in Denver, Colo. to Dr. Guel and Dorothy Robb. Judge Robb attended Denver public schools graduating from South High School. He attended the University of Denver receiving his BA (1951) and his law degree (1953). Robb was admitted to the practice of law before the Courts of the State of Colorado and the United States District Court in 1953 and moved to Pueblo to join a private law practice that same year. He would later become a named partner in the firm of Lattimer, Robb and Naylor. Judge Robb would become a pillar in the community of Pueblo. One of his proudest moments was personally welcoming President John F. Kennedy to Pueblo for the dedication of the Frying Pan-Arkansas Project (Lake Pueblo State Park) while serving as president of the Pueblo City Council. During his tenure in local government, Robb served on the Pueblo City Council from 1960 to 1963, his final two years as president. From 1964 to 1974 he served as Assistant Attorney General for the State of Colorado in the Pueblo Regional Office representing the Colorado State Hospital, Pueblo Regional Center, Colorado State Fair, Southern Colorado State College (now CSU Pueblo) and other Colorado State agencies. In 1973, Robb was appointed District Court Judge in Pueblo County and he served in that position until his retirement in 1993. “Those 20 years on the bench were challenging, rewarding and definitely the highlight of my legal career,” he later wrote. Robb served as Chief Judge, Tenth Judicial District from 1989 to 1991. After retirement he established a private law firm and practiced from 1995 to 1999. Robb served as a Member of the Colorado Bar Association, Pueblo County Bar Association, Denver Bar Association, Colorado District Judge’s Association and Supreme Court Judicial Advisory Council. Judge Robb was honored for his 50 years in the legal profession by the Colorado Bar Association. Well after his second retirement, Robb also served as a Member of the Chemical Demilitarization Citizens Advisory Commission in Pueblo.
In addition to his professional accomplishments, the “Judge” as he was endearingly known to those close to him, valued his time with his family. He would often say, “I have a wonderful family.” He was first married to Rose Robb for 19 years. Later, he married Patricia W. “Pat” Robb in 1971, and they were together for 38 years, enjoying their mountain home near Rye, Colo. until Pat’s passing in 2009. The Judge was an avid sports fan and also enjoyed working on his ranch “Robb Ranch,” fishing, boating and photography. Judge Robb is survived by his five children, Janet (Tim) Murphy, Jean Weisbrod, JoAnne (Robert) Purkey, Jim (Jackie) Robb and Steele Wotkyns; and their families including nine grandchildren and nine great-grandchildren.
To help ensure the health of people in the community he loved, there will be no service held in his memory due to COVID-19. Donations in his name are welcome to Sangre de Cristo Community Care, 1920 Valley Dr, Pueblo, CO 81008, St. Jude’s Children’s Research Hospital, 262 Danny Thomas Place, Memphis, TN 38105 and the Alzheimer’s Association,4104 Outlook Blvd, Pueblo, CO 81008. Online condolences, www.montgomerysteward.com.