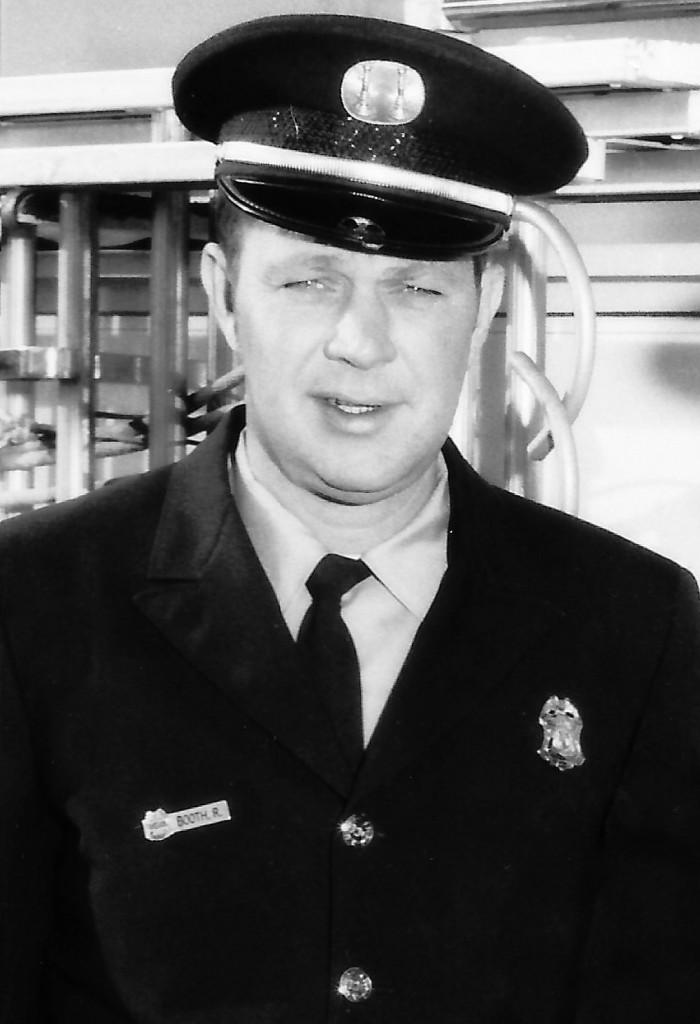 The last alarm sounded for Richard Albert 'Dick' Booth on August 18, 2017. He was born to Albert and Arta Booth on Sept 8, 1933, in Pueblo, Colorado. Left to cherish his memory are his bride of 63 years, Barbara; daughter, Paula Anselmo; son, Richard Eric Booth; granddaughter, Giana Marie Anselmo; grandson, Jared Dalton Booth; sister, Barbara Bohman, and numerous other relatives. He was preceded in death by his parents; and grandson, Augie Anselmo. Dick attended Pueblo Centennial High School, graduating in 1951, and always fancied himself a cowboy. He tried the rodeo circuit for awhile, but eventually had to get a real job if he wanted to marry Barbara. He worked numerous jobs, including Mountain Bell Telephone, and Pueblo Gas and Fuel, until he found his true love, firefighting. In his years at the fire department, he found his best friends, and an extended family. He retired as Captain when it became more sensible to run out of burning buildings than into them. Dick truly had no better group of pals than those he served with. He was quite the entrepreneur, as well, starting many companies with his fireman buddies on his days off from the department. He never made much money, but they all had a lot of fun. Dick was very community oriented, and belonged to several service organizations, including the Eagles, the Elks, Sertoma, Pueblo Municipal Shooters and Pueblo Skeet and Trap, and the Pueblo Woodturners. For many years he volunteered at the Colorado State Fair, mostly weighing the pigs, and was a volunteer with the Boy Scouts. He also volunteered to light the fireworks at Dutch Clark Stadium and CSU Pueblo. He was an avid neighborhood watch person. In his younger years, he was the number to call if anything happened to anyone in the night. In his later years, he was the neighborhood welcoming committee. Dick was an artist with wood. He made beautiful wood-turned projects and was a regular at the holiday craft shows and boutiques. He had a real thing for reindeer for a few years -everyone in Pueblo surely has one of his creations. Dick loved and lived life to the fullest. He spent countless hours with his immediate and extended families, improving his home and helping anyone needing assistance. Dick turned his kids on to snow skiing and tubing, water skiing and boating, and took us on vacations all around Colorado to learn of its beauty. He loved hunting, scuba diving, guns and target practice, smoking cigarettes, and Glen Levitt Scotch. Dick had a deep commitment to keeping his community safe, and he had an easy laugh as well. He will be sorely missed. Memorial service, 2:00 p.m. Friday, August 25, in the Montgomery & Steward chapel. In lieu of flowers and food, please send any contributions to PAWS animal shelter, PO Box 11208, Pueblo, CO 81001, because Dick never met a dog he didn't like. Online condolences, www.MontgomerySteward.com