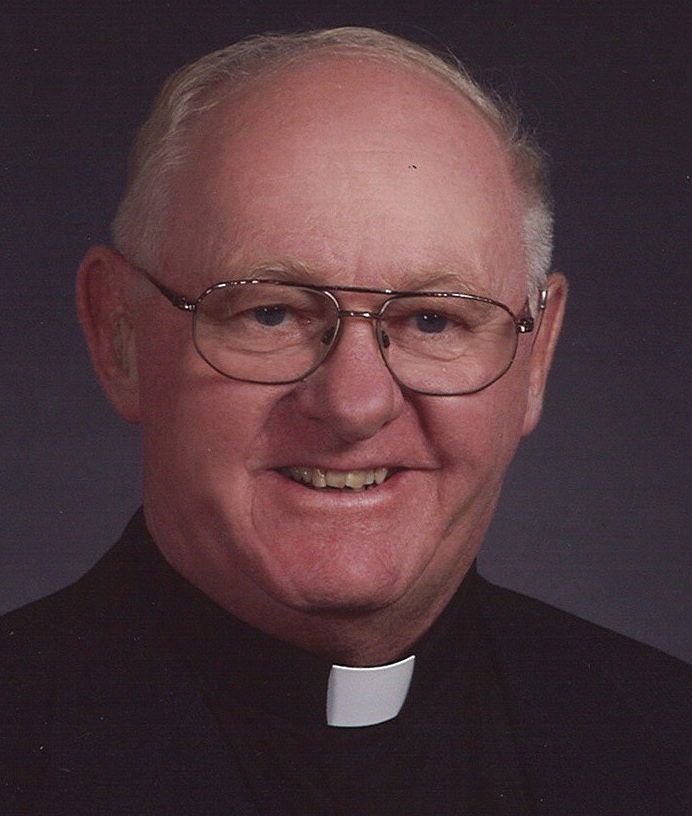 Father William Thomas Gleeson was born September 13, 1938 in Jersey City, NJ to James Francis Gleeson and Mary Elizabeth (Reidy) Gleeson. Fr. Gleeson was the youngest of four siblings, two brothers (James F. and John J.) and one sister (Mary P.). He attended Seminary at Immaculate Conception in Conception, Missouri, which he completed in 1966. Fr. Gleeson was ordained a priest for the Diocese of Pueblo in 1966 at the Cathedral of the Sacred Heart in Newark, NJ by Archbishop Thomas A. Boland of Newark. Fr. Gleeson began his service to the Diocese of Pueblo at St. Mary Parish, Montrose where he was Assistant Pastor for two years. In 1968 he was appointed Assistant Pastor at St. Pius X, Pueblo. Fr. Gleeson went on to serve at St. Mary, Las Animas for 10 years, after which he was Pastor at St. Mary, Walsenburg. He spent a brief time in Aguilar as Pastor (2 years), returning to Pueblo assigned to Christ the King, along with appointments to the Clergy Personnel Committee, the Diocesan Cemetery Board, and the Financial Advisory Council. In 1995 Fr. Gleeson became Pastor to St. Joseph, Capulin, along with its mission parishes, where he remained until 2001. His next assignment was at Sacred Heart, Alamosa for six years before his final appointment to St. Joseph, Pueblo, where he served until his retirement from active ministry in January, 2013. Fr. Gleeson remained active in the Diocese after his retirement. He could often be found celebrating Mass at the parishes to which he was connected. Fr. Gleeson was an avid Broncos football fan and could always be heard singing or humming joyfully to himself. He was a source of good nature to all those he knew; upbeat, social, and of bright spirit. Viewing, 3 to 6 p.m. Monday, Feb. 12, followed by the Vigil service at 6:00 PM. Mass of Christian Burial will be celebrated 10 a.m. Tuesday, February 13. The viewing and services at Sacred Heart Cathedral, 11th Street and Grand Ave. Burial rites at Roselawn Cemetery. Lunch reception at Sacred Heart Cathedral Hall following burial rites. Online condolences, www.montgomerysteward.com