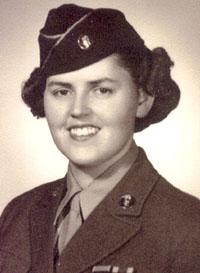 Esther 'Randy' Irons was born November 20, 1918, in Long Beach, Calif. She was one of seven children. She graduated from Woodrow Wilson High School and Long Beach City College, then entered the Women's Army Corps (WAC) United States Army 1942-1945. Randy married Charles A. Irons, Jr. in 1945, in Washington, D.C. They had three children, Christopher, Charles and Marjorie. Her husband was in the Army and they moved around the world until they settled in Pueblo, Colo., in 1965. Randy was an athlete and spent her time playing tennis, golf and just being active. She spent a lot of her time in volunteer work and community service. Randy worked as a second grade volunteer for over ten years and earned the Sunshine Volunteer Award for her community service. Randy also spent 20 years as a volunteer at the KTSC PBS station. Preceded in death by her husband, Charles and son, Christopher. Survived by her son, Charles A. (Cathleen) Irons, III of Falcon, Colo.; daughter, Marjorie (Brian) Davis of Colorado Springs, Colo. and seven grandchildren. Memorial service, 1 p.m. Friday, June 15, 2007, in the Montgomery & Steward Chapel with the Reverend Dr. Rick Calhoun officiating. Online condolences, MontgomerySteward.com