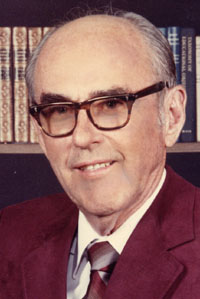 Ralph W. Adkins, 88, of Pueblo, Colorado, passed away January 5, 2006. Survived by his wife of 60 years, Barbara 'Bobbye' Adkins of the family home; daughter, Nita (Tony) Castillo of Aurora; sisters-in-law, Betty Adkins and Helen (Royal) Woods; grandchildren, Jessica Castillo and Benjamin Castillo of Aurora and Alexandra Adkins and Victoria Adkins, both of Sunnyvale, Calif.; nieces and nephews, Wendy Lee (Blair) Dalton, Michael Adkins, Marsha (Brian) Gustin, Bruce Woods, and Royal Woods IV. Preceded in death by his son, Ralph W. Adkins, Jr. on Sept. 29, 1999; parents, Clyde and Sallie Adkins; and brother, Vernon Adkins. Ralph was born on November 11, 1917, in La Junta, Colo. He received his B.S. degree in Civil Engineering from Colorado State University in 1943 and was a Sigma Tau. While a student at CSU, Ralph was on the team that designed the Parshall flume for water measurement. He began his career with the Colorado Fuel & Iron Corp. in 1943, then served as a Line Officer for the US Navy during World War II. He resumed his engineering career with CF&I in 1946, ultimately serving as Director of Land and Water for CF&I from 1965 until his retirement in 1983. His responsibilities included management of one of Colorado's most extensive systems of water rights and facilities. In 1983, Ralph continued his water engineering career as president of his consulting firm, Ralph Adkins & Associates. In 1973, Ralph began his 29 years of service on the Board of Directors of the Southeastern Colorado Water Conservancy District, and served as President of the District from 1991 to 2002. Under his leadership as president, the District Board completed a comprehensive study of water storage needs within the District, and began efforts to implement a plan to expand storage in the Pueblo Reservoir and Turquoise Reservoir. In May 2002, Ralph received the first ever Distinguished Service Award presented by the Southeastern Colorado Water Conservancy District. Ralph also served for many years on the Board of Directors of the Colorado Water Congress, serving as their President in 1977, and was made an Honorary Life Member of the Water Congress in 1992. In 1997, Ralph was honored with the highest award given by the Colorado Water Congress, the Wayne S. Aspinall Water Leader of the Year Award. He also served on the Advisory Committee for the Colorado State University School of Engineering Dean's Council, and on the Region Board of the American Baptist Churches of the Rocky Mountains. He was instrumental in the purchase and development of Black Forest Camp and Conference Center. He served on the Board of Managers for over 50 years. He was a life member of both American Water Works Association and the National Water Resources Association. He was a member of the First Baptist Church, where he served on the Board of Trustees, the building committee and other committees, Silver State Lodge No. 95, A.F. & A. M., Pueblo Rotary No. 43 and former member of the Steel City Kiwanis. Some of Ralph's other community involvements include, serving on the Pueblo Chamber of Commerce Board of Directors, Executive Committee of Arkansas Valley Ditch Association, Pueblo CSU Alumni Board and Pueblo YMCA Camp Board. He was also a Vice President of Union Ditch and Water Company, Director of Fremont City Ditch Company and Upper Purgatory River and Chair of Salvation Army Board. Ralph was proud of being named the first 'Boss of the Year' for Kachina Chapter of the National Secretary Association and in 1978, he was awarded the distinguished Pueblo Chapter CSU Alumni of the Year 'Water Buffalo' Award. He will lie in state at the funeral home Monday from 1 to 7 p.m. Graveside service, 1:30 p.m. Tuesday at the Linn Grove Cemetery in Greeley. Memorial service, 1:30 p.m. Wednesday, Jan. 11, 2006, at First Baptist Church, 9th & Grand Ave., with the Reverend James Harley officiating. Those who desire may make memorials to the sustained scholarship fund at First Baptist Church, c/o Montgomery & Steward Funeral Directors, 1317 N. Main Street, Pueblo, Colorado 81003. Online condolences, www.montgomerysteward.com