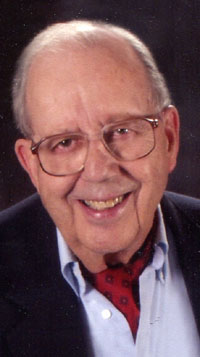 Ralph Levy, 86, left this earth on July 3, 2007, from complications of COPD. His death leaves a void in the musical communities of southern Colorado and a tremendous loss to his family, friends and colleagues. Born in Walsenburg, Colorado on December 27, 1920, to Ralph Levy, Sr. and Ellen Mae(Maiden name: Hansen) Levy, Ralph and sister, Janice Elaine (Sandy, deceased) Lenzini, enjoyed a lifetime of laughter and friendship. After graduating from Huerfano County High School in 1938, Ralph hit the road with saxophone in hand, a few bucks in his new zoot suit pockets, and a long list of swing standards ready for nightclubs. In 1942, Uncle Sam called him up and he was soon on his way with the US Army 556th Bomb Squadron as entertainment director performing for troops in England, France, Belgium, Holland and Germany during WWII. After an honorable discharge, Ralph headed stateside as a professional jazzer. He had four great years of gigs, and soloed with some of the finest 'Big Bands,' most notably, Gene Krupa, Herb Miller and Jimmy Dorsey. While attending the University of Northern Colorado in Greeley, Ralph earned his BA and MA in Music and fell for a blonde bombshell singing with one of the college's stage bands. Ralph and Anna Jane Stine were married in Sterling, Colo., on June 5, 1947, the day following Ann's graduation as a music major. Their married lives took shape in Ralph's hometown of Walsenburg as he began his teaching career as the high school band director and she as the vocal music teacher. Following in their parents' footsteps, their three children, Suellen Levy of Walsenburg, Cherilyn Robeda of Denver and Brent Levy of Denver, pursued entertainment, teaching and caregiving careers. A move to Pueblo in the early sixties melded a lifetime of Ralph's musical experiences, civic activities, professional and fraternal affiliations, and two lifetime worth's of guest lectureships and clinics, guest conducting and adjudicating, consulting and mentoring and college and studio teaching. Whether leading honor bands in Colorado or concert bands at Six Flags over Georgia and Texas; scoring instrumentalists at state sponsored solo and ensemble competitions or judging CU or CSU Marching Band Days; teaching graduate courses at universities across the nation or starting an elementary age child on a woodwind instrument, Ralph Levy was highly sought for his dedication to his art, his determination to bring out the best in one's musical expression and his direction to his department at Pueblo Junior College, Southern Colorado State College and the University of Southern Colorado. With integrity and tenacity he built the music department from a small two year program with just a handful of young kids (who later became some of the finest professional musicians in this part of the country), to one of the largest and most highly respected music education degreed programs in the southwest, graduating hundreds who went on to rewarding teaching and performing careers. Highlights of his teaching at SCSC and USC were the formation of the Pueblo Wind Symphonette, Concert Band tours, and extremely popular Symphonic Jazz Band performances, as well as his professional and personal associations with Jim Duncan, Rod Townley, John Strobel, Gil Garcia, Ed Lewis, Gary Barrows, George Roach, Victoria Markowski, Frank Cedrone, Mary Jane Oreskovich, Sid Rosen and Steve Comi. He valued each and every member on the music staff and knew how to build a department from within. His strength was recruiting- be it new staff for a growing department, students to fill in the ranks, or scholarships to bring them to Pueblo to study. After retirement in 1981 he was awarded the title of Emeritus Professor of Music of USC and continued to enjoy teaching at USC relishing the many concerts in Hoag Hall of which he helped design and secure funding for its completion. It was a grievous day when the new administration CSU-Pueblo demanded he turn in his keys to the music building as he watched the department begin to flounder due to budget cuts and loss of some its finest teaching staff. Leadership was Ralph Levy's forte. He offered his time, talents and expertise to the American Bandmasters Association, Music Educators National Conference, presidency of Colorado Music Educators Association, Phi Mu Alpha Sinfonia, Kappa Kappa Psi, MENC Conferences, the American Legion, Veterans of Foreign Wars, Elks, Royal Arch Masons, and Past Master of Southern Colorado Consistory, and Huerfano Lodge #27. He played in the Pueblo Symphony Orchestra, the Pueblo Municipal Band, was Band Chairman for the Colorado State Fair, and Music Chairman for the founding of KTSC Public Television. His efforts did not go unnoticed. He was awarded 'Men of Note in Music' from Conn Band, 'Who's Who in the West' and International 'Who's Who in Music'and a published writer in 'Trendsetters in Music Education.' In 1986 he was inducted into the Colorado Music Educators Hall of Fame. In 1987 he earned a Doctor of Music from the Conservatorio de Musica, Universidad Politecnica, Valencia, Spain. And in 1994 he was the recipient of the 'Columbine Award' for outstanding dedication and service to music and education in the state of Colorado. At the end of such a busy life Ralph Levy still took the greatest joy and satisfaction from his children, grandchildren, nieces and nephew's happiness and accomplishments: grandchildren, Scott (Cassie) Robeda of Denver, Katie Robeda of Denver and Seth Lockard of Colorado Springs; nieces, Alexis (Dee)(n?Lenzini)Betts and Deidre Lenzini; and nephew, Doug Lenzini; and in he and Ann's sixty years of married life. His motto: 'Love Music. Practice Diligently.'Private graveside service and military honors by Pueblo Veterans' Ritual Team followed by a memorial service at 2:30 p.m. Tuesday, July 10, 2007, in the Montgomery & Steward Chapel. Masonic Rites by Huerfano Masonic Lodge No. 27, A.F.&A.M., 10 a.m. on July 17, 2007, at the Masonic Cemetery in Walsenburg. The family respectfully requests the omission of food and flowers. Those who desire may make memorials to Huerfano Masonic Lodge No. 27, A.F.&A.M. through Montgomery & Steward Funeral Directors, 1317 N.Main St., Pueblo, Colo. 81003. Online condolences, MontgomerySteward.com