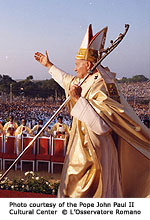 His Holiness Pope John Paul II May 18, 1920 - April 2, 2005 Karol Jozef Wojtyla, also known as Pope John Paul II, was born May 18, 1920 in Wadowice, a small city near Krakow, Poland. He was the second of two sons born to Karol Wojtyla Sr., a retired army officer and tailor, and Emilia Kaczorowska Wojtyla, a schoolteacher. During his childhood the Pope experienced many hardships including the loss of his mother, Emilia, and only brother, Edmund. His father died in 1941 when Karol was 20, which left him the sole survivor of his immediate family. As a teenager he enjoyed religion, poetry and theater. In 1938, he enrolled at Krakow's Jagiellonian University to study literature and philosophy. However, the Nazi occupation forces closed the university in 1939, forcing him to work in a quarry and chemical factory to earn a living and avoid deportation to Germany. With schools closed during the German occupation, Karol helped set up an underground university and the clandestine 'Rhapsodic Theater.' Recognizing his call to the priesthood, Karol began courses in the clandestine seminary of Krakow in 1942. When World War II ended, he resumed his studies in the major seminary of Krakow, and in the faculty of theology of the Jagiellonian University. He was ordained as a priest on November 1, 1946. Father Wojtyla was then sent to study at Rome's Angelicum University. Upon his return to Poland from Rome, he was vicar of various parishes in Krakow as well as chaplain for the university students until 1951, when he resumed his studies of philosophy and theology. Father Wojtyla eventually became professor of moral theology and social ethics in the major seminary of Krakow and in the Faculty of Theology of Lublin Catholic University. Pope Pius XII appointed him as Auxiliary Bishop of Krakow in 1958. In 1964, he was nominated Archbishop of Krakow by Pope Paul VI, who also made him a cardinal in 1967. Cardinal Wojtyla was one of the youngest cardinals in the Church and a moderate reformer, with a strategy that honored the beliefs and traditions of Catholicism while at the same time accommodating the Communist government. On October 16, 1978, Cardinal Wojtyla was chosen by the Sacred College of Cardinals as the next pope. He took the name John Paul II and became the first Slavic pope and the youngest pope in 132 years. He immediately embarked on restoration of the Catholic Church, one grounded in its conservative tradition. Pope John Paul II was a divine leader with sharp intellect, emotion and spirituality. He was welcomed by Catholics and non-Catholics alike, and is credited for his morale-boosting trips to numerous countries. He is known for his political activism, most notably helping to bring down European Communism and defending human rights worldwide. The most traveled pope in history, he frequently used media and technology to communicate issues related to moral and ethical values and global affairs. Ultimately, Pope John Paul II believed that prayer and faith can make people happy and change the world. *Information Source: www.vatican.va Photos courtesy of the Pope John Paul II Cultural Center, éL'Osservatore Romano