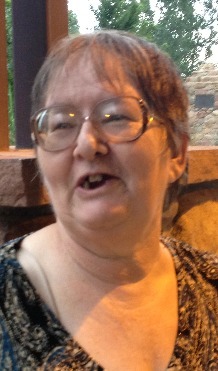 Peggy S. Kingston, 64, was born February 3, 1951, and passed away on June 18, 2015, at her family home in Piñon, Colo. Preceded in death by son, Charles Chacon; parents, Clarence and Sarah Faye Benesch; brothers, Joe Stevens and Harold Benesch. Survived by brother, Donald (Phyllis) Stevens; sisters-in-law, Alene Benesch and Ruth Stevens; niece, Kathleen (Tim) Vaughan; and many other nieces and nephews scattered throughout the United States. Peggy graduated from Pueblo County High School and Pueblo Junior College (now PCC). She was employed at Windwind Village as an LPN. She had a very special place in her heart for seniors needing care and she had a great deal of patience to carry it out. Before her mother died, Peggy took care of her for ten years. Peggy fed the birds and played ball with her dogs. She loved her pets and those of her family, most of which were shelter animals, and they returned love to her. Before her health started failing, she played the piano and was a talented artist, although she didn't think her work was good. For Peggy, family always came first and she will be missed by many. A gathering of family and friends will be held at 2 p.m. Monday, June 29, 2015, in the Montgomery & Steward Reception Hall. In lieu of food or flowers, donations can be made to PAWS, P.O. Box 11208, Pueblo, CO 81001, Pueblo Animal Services, 4600 Eagleridge Cir., Pueblo, CO 81008 or direct to a charity of your choice. Online condolences, MontgomerySteward.com