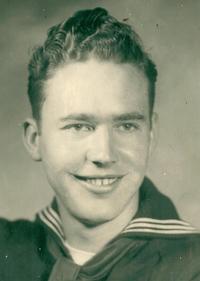 Paul Gerald Bezona, of Pueblo, Colorado, died September 11, 2005, following a battle with cancer. He was 81. Bezona was born in Casper, Wyoming, on September 10, 1924, the second child of ten born to Otto E. and Ida Rebecca Bezona. He grew up on the family homestead in Granada, Colorado, fostering an interest in horses while helping his family with a wheat and cattle operation and was a 1943 graduate of Granada High School. He enlisted in the U.S. Navy where he served as a radio man/tailgunner. While stationed in Florida, he started a lifelong fascination with music and taught himself to play the guitar and several other stringed instruments. On December 17, 1948, he married Mary Ilene Pearson in Raton, N.M. The couple continued residence in Granada, where two daughters, Tecla and Teala, were born. The couple then moved to Pinon, Colorado, where he was employed at the Pueblo Ordinance Depot and then eventually as a ranch hand and horse trainer for the Phelps Ranch. Bezona was a key motivator in the creation of the Pinon Saddle Club. He competed at the local rodeos in various events, with a special fondness for the calf roping. The couple then laid roots in Pueblo on Highway 78 where two more daughters, Talca and Tonya, were born and where they lived for 22 years. During this time, Bezona continued his affiliation with animals and bred, trained and sold horses. He also continued his interest in music and when his daughters shared this interest, they formed a band. With the name of Paul and the Three T's, the band played area dances and occasions in the 1960s and 70s. Bezona retired from the CF&I Steel Corporation, ending a 30-year career in which he worked in the boiler shop. At the time of his death, he was an active member of the CF&I Old Timers Organization and the Eagles Lodge #145. He was a previous member of the Minnequa University Club and was an accomplished hunter and fisherman. He is preceded in death by his parents, Otto E. and Ida Rebecca Bezona; brothers, Scott E., Richard E. (Joyce) and C. Dean. He survived by his wife of 56 years, Mary I. Bezona; daughters, Tecla D. (Ernie) Chamblin; Teala D. Bezona (Tony); Talca D. (George) Woods; Tonya D. (Tony) Pinelle; grandchildren, Paulette (Shayne) O'Hotto; Clint (Kris) Chamblin; Georgette (David) Book; Brandie Bezona; Shanalee McGhee; Tarah (Jim) Damgaard; Nicki Pinelle; Chris Pinelle; eight great-grandchildren; brothers, Alfred A.; Boyd D. (Norma Jean); Roy Lee (Judy); sisters, Lois I. Wieman; Lola L. Brooks; Betty L. (Jesse) Melton; sisters-in-law, Lois A. Bezona and C. Jeanne Bezona; and their families. Paul will be remembered as a generous, hard working, loving father, husband and family man as well as a kind friend. Viewing at the funeral home today from 10 a.m. to 7 p.m. The casket will be closed at the church. Funeral service will be held 10 a.m. Wednesday, Sept. 14, 2005, at First Church of God, 528 W. Abriendo, with Pastor Danny Bryant officiating. Military honors by Pueblo Veterans' Ritual Team and interment will follow at Imperial Memorial Gardens. Those who desire may make memorials to Sangre de Cristo Hospice, c/o Montgomery & Steward Funeral Directors, 1317 N. Main St., Pueblo, Colo. 81003. Online condolences, www.montgomerysteward.com