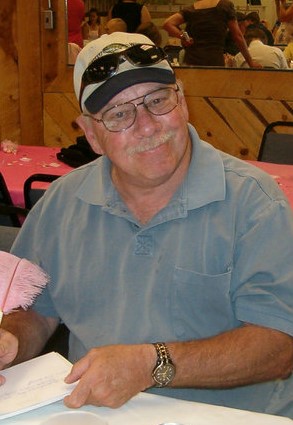 Patrick Lee McGoff, 72, born January 17, 1947, and passed away July 31, 2019. Preceded in death by parents, George W. and Eugenia (Hyde) McGoff; and sister, Jeanie Washko. Survived by brother, George D. (Sandi) McGoff of Colorado; nephews and nieces, Dennis McGoff of Colorado, Karissa Gibbens of Colorado, George 'Damien' (Autumn) McGoff of Colorado, Nicole Hardt of South Carolina, Steven Kirkendall of Colorado, Terry Washko of Oklahoma, William Washko of Colorado and Tracey Washko-Witt of Colorado; numerous great-nephews and nieces; his special friend, Maria Martinez; many friends; and the love of his life his dog, Ginger. Pat graduated from Roosevelt High School in Des Moines, Iowa in 1965. He served in the U.S. Air Force from 1965 to 1970. From his brother George: Patrick was always my hero, from defending his little brother, to those things he fought back from. His courage, in the face of this second bout with cancer, was both amazing and discouraging, as he slipped away. Amazing for his tenacity and strength, and discouraging as he slowly lost his fight. Pat told me, in his first bout, if he could just get a good five years more, he would be grateful, and he did just that! At Pat's request there will only be a small service at Ft. Logan National Cemetery, where his ashes will be laid to rest with family and friends. He and I appreciate all the good times we shared on Facebook with his High School chums...and I had no idea, how many of you there are, which was an amazing thing. He cherished his friends on FB, HS buddies and family. He was loved by those who provided his care in this last battle. He appreciated and loved those who did so wonderfully on his care. So, to the Rocky Mountain Regional Veterans Medical Center, in Aurora, K-2, H-3, ICU, his 'team' of doctors, social worker staff and the palliative care unit along with the Sangre de Cristo Hospice staff, hugs to one and all. Pat also knew how instrumental the Fisher House, in Aurora, was for us to be there with him, for most of the final two months of his battle. Graveside service, 1:15 p.m. Monday, Aug. 12, 2019, at Ft. Logan National Cemetery in Denver, Colo. with military honors. For anyone wishing to donate in Pat's memory, please do so to Fisher House, 303 S. Broadway #200-412, Denver, CO 80209 a home for relatives of veterans under care, who do a fantastic job caring for the loved ones, or Sangre de Cristo Hospice, 1207 Pueblo Blvd. Way, Pueblo, CO 81005. Always my hero, bro. Such a strong, caring man and gentle soul. Love you. God got a great addition!!