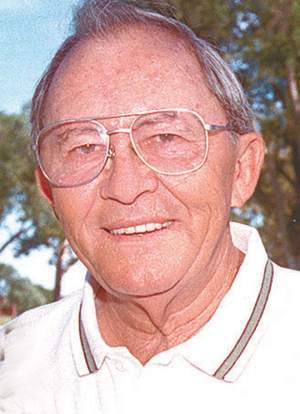 Pat Rea, 81, Pueblo Country Club golf pro emeritus, passed away from cancer on Wednesday, June 19, 2013. He was born on St. Patrick's Day, March 17, 1932, in Stockton, Kans., to Dan and Edith (Allen) Rea. Pat's father, Dan, was in the Air Force and played in the Air Force band. They lived in California and Arizona before moving to Albuquerque in 1939. He married Dixie Shipler and they were married for over 50 years when she preceded in him in death on Sept. 26, 2009. He proudly served in the U.S. Army and before finishing his service, he became a golf instructor to the officers. Pat started his golfing 'career' as a caddy. An outstanding teacher as well as a player, Pat has coached and supported the University of Southern Colorado golf team pro bono and has been a strong supporter of junior golf for years. He served as secretary and later on the board of the Colorado PGA Section which he joined in 1957. Rea began his career at the Pueblo Country Club in 1957 and worked as head pro until 1997. He founded the Hackers Holiday in 1960 and it is the longest-running member-guest tournament in Colorado. Few local legends reach icon status, but Rea did – without even trying. He played in three U.S. Opens and two PGA Championships. He won the Colorado Open in 1975 and said in an interview that was one of his top moments in golf. He was victorious in the Wyoming Open, the Mile High Open, the Colorado Section PGA Championship and the Southern Colorado Open. Rea was named Colorado Section PGA player of the year three times. He was inducted into the Colorado Golf Hall of Fame in 1995 and the Greater Pueblo Sports Hall of Fame in 1997. 'I lost a great friend and mentor,' said Mike Zaremba, director of golf at Desert Hawk Golf Course. 'The guy won more than 60 tournaments in his career and he could flat play. Pat didn't say much, but as a man, his integrity was beyond reproach.' 'He won the Rocky Mountain Open five straight years at one point, so I asked him how he was able to do that,' Zaremba said. 'He just said that he knew what he had to do to get it done and he did it. 'In his prime, I would've taken him against anyone in the world from 80 yards and in. He loved to play and compete, and he'd take your money while looking you in the eye with a smile.' 'Pat was a pretty quiet guy, but he was a great judge of character and he knew who was the real deal,' Zaremba said. 'And he was the real deal, of course.' Fitting that the Hackers Holiday, a golf tournament Pat Rea started more than 50 years ago at the Pueblo Country Club, begins today, June 20 – one day after his death. Pat was a member of the BPO Elk's #90 in Pueblo for 56 years. At Rea's request, there will be no services. Cremation, Montgomery & Steward Crematorium. Memorial contributions may be made to YMCA First Tee or Sangre de Cristo Hospice through Montgomery & Steward Funeral Directors, 1317 N. Main St., Pueblo, CO 81003. Online condolences, www.montgomerysteward.com