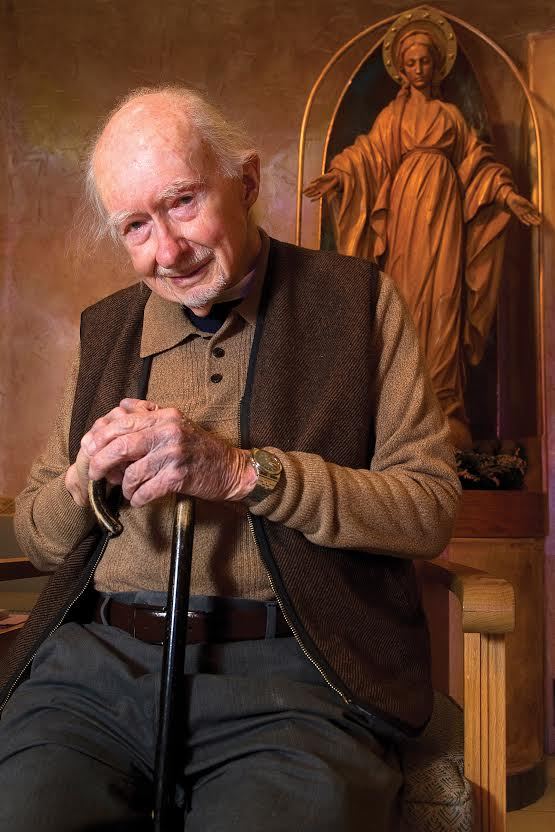 Monsignor Howard L. Delaney, 102, passed away April 11, 2014. He was born one of three children to Michael and Mildred Delaney on Dec. 11, 1911, in David City, Neb. From riding a pony at age eight to his one-room school house in David City, to flying an airplane around the country, as well as the diocese, at times with Bishop Buswell in tow, Msgr. Howard Delaney was the unrivaled Renaissance priest. He had a degree in mining from Colorado School of Mines, and a brief career in engineering before he heard the call to the priesthood. From 1934-1940, Msgr. Delaney studied at St. Thomas Seminary in Denver completing his philosophical and theological studies. He was ordained through the Denver Diocese on May 18, 1940, which was two years prior to the Pueblo Diocese being established. Starting June 15, 1940, he served in Walsenburg and in 1944, was appointed Pastor of St. Mary Church in Walsenburg, Colo. and Dean of Walsenburg Deanery. From building a pipe organ from scratch in Walsenburg to being in the forefront of the computer age, he never tired of a challenge. In fact when La Veta, Colo. needed a church, he found out how to make adobe bricks so that he and his future parishioners could build Sacred Heart Church which still stands today. There was no money to speak of, but he found a way. His accomplishments abound: he taught English to immigrants, he spoke two languages, Spanish and English, he was musically gifted, playing the organ, the recorder and other Renaissance instruments. He was also actively involved with the Pueblo Symphony for many years. He wrote a book on Walsenburg as well as collaborating with Msgr. Patrick C. Stauter on The Willging Years. He founded St. Mary's North Cemetery in Walsenburg. He traveled extensively, including a tour of South America on a freighter. Msgr. Delaney was invested as Domestic Prelate in 1958, appointed as a member on the Diocesan Building Committee in 1961, listed as administrator pro tem of Sacred Heart in Gardner in 1965 and was appointed pastor of Christ the King Church, Pueblo in 1967. Msgr. Delaney retired from the Pueblo Diocese on Dec. 31, 1976. While retired, he was appointed vice chairperson of the committee for the 50th anniversary of the Pueblo Diocese. In 2005, he was appointed to serve as Sacramental Minister for the St. Peter Parishes in Rocky Ford and Ordway as well as Mary Queen of Heaven in Fowler. Msgr. Delaney served under all five of the Pueblo Diocese bishops. Msgr. Delaney lived a life of simplicity and graciousness, humility and honesty. Through hard times, the Depression, lack of funds, the wars, and good times, he was a priest of the people, 'a good priest,' a good man. He gave his all to the Church through his deep love of God. He enjoyed participating in the weekly Bible study groups and the coffee group. He would state, 'they were there to solve the world's problems.' Yet, this is only a small part of what Msgr. Howard Delaney was all about. What a great sense of humor he had. What a man of integrity, honoring each and every person with the love of God. He was so humble and unassuming: paying him a compliment got you a laugh and a refutation. Asked toward the end for advice for how to live a good life, he gave another laugh and a quick change of subject. Humility. Monsignor was dearly loved by all. To know him was to have known a holy man. Thank you to the Pueblo Villa Pavilion and Sangre de Cristo Hospice for the care they gave him in his final days. Viewing from 1 to 4 p.m. Monday in the Montgomery & Steward Chapel. Vigil service, 6:30 p.m. Monday and Mass of Christian Burial, 10 a.m. Tuesday, April 15, 2014. The Most Reverend Stephen Berg will officiate over the Vigil service and will be the Celebrant for the Mass. Both services will be held at Cathedral of the Sacred Heart, 11th and Grand St. Interment, 2:30 p.m. Tuesday at St. Mary's North Cemetery in Walsenburg. In his honor, memorials may be made to Los Pobres through Montgomery & Steward Funeral Directors, 1317 N. Main St., Pueblo, CO 81003. Online condolences, www.montgomerysteward.com