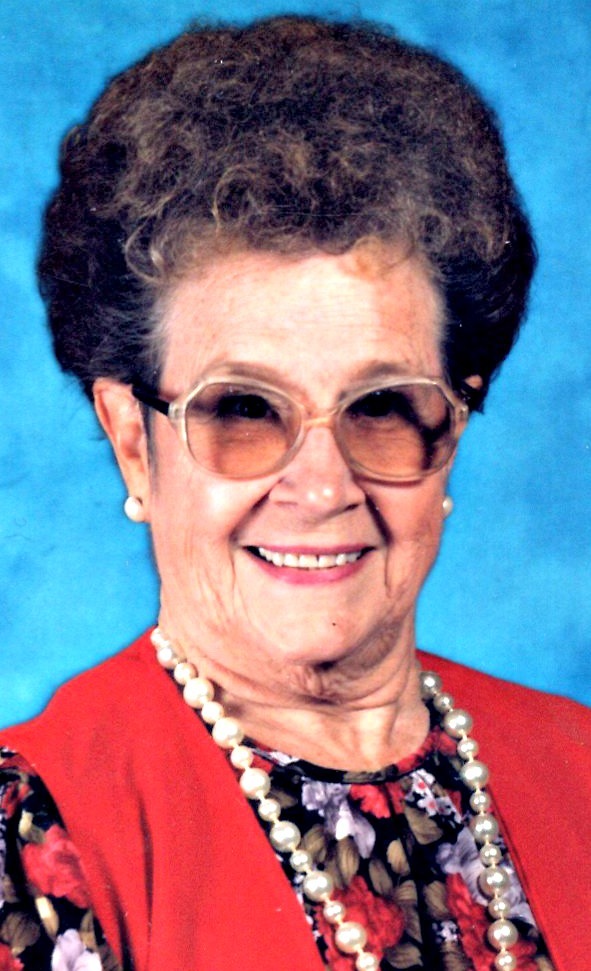 Mildred L. Hall, 95, of Pueblo, passed away Feb. 12, 2017. Millie was born on Dec. 24, 1921, in Gering Neb. Preceded in death by her parents, John (Lilly) Thomas and Ida (Amos) Slaughterback; husband, Walter E. Hall, Sr.; son, Walter E. Hall, Jr.; sister, Vivian (Ed) Lewis, Donald Thomas, Dean Thomas and James Thomas; and great grandson, Zachary Neal Hall. Survived by sons, Neal (Phyllis) Hall and Tom (Vivian) Hall; grandchildren, Chad and Kellie Hall, Lecia (Patrick) Pantleo, Shannon (Frank) Barker, Chalaine (Josh) Heyer, Kama (Mike) Kreutzer, Tom Jr. (Terra) Hall and Bobbi (Ginny) Hall; and 16 great-grandchildren, Kyle Depetro, Hunter and Cody Oscarson, Josh (Kim), Ben, Nicholaus and Zeb Pantleo, Kendyl (Ryne) Davis, Mackenzie (Collin Menter) Hunter, Savanna Basford, Kyle, Kayla and Kameron Parker, Payton and Avery Kreutzer and Tom Hall III; and sisters-in-law, Lorraine Zabukovic, Gerry Thomas and Eloise Thomas. God was her first love and she enjoyed working for her church. A proud graduate of Centennial High School Class of 1940. Some of the many things Millie was involved in: President of Belmont Women's Club serving over 500 members Five time past PTA President at Fountain and Belmont Elementary and East High School. She held every office in the PTA and won the state award for the most magazines sold Was a charter volunteer for the March of Dimes Master and advanced Master Gardener Ran for County Commissioner in 1976 Worked for County Road & Bridge, as George Amaya's executive secretary In 1960, she was a radio talk show host on KDZA called 'Meet Millie' As a District Director for Linda Lee Cosmetics, she won 'Queen for a Day,' with an all expense paid trip to St. Louis, Mo. She was honored with a banquet at the Brown Palace in Denver, Colo. for being the District Director with the highest sales in the Rocky Mountain Region Worked eight years in the administration of School District 60 before going to work for Commissioner George D. Amaya Was one of the original committee of 12 that worked to bring Public Television to Pueblo Served on the board of the YMCA, Cancer & Easter Seal. Chairman of the Easter Seal parade and twice for the Handicap Camp. Was given 'The Pueblo Beautiful' Award Belonged to Professional Secretary International Member of Beta Sigma Phi & won an award for naming the magazine 'The Folisman' served as President for the Post Office Auxiliary Secretary for the Charter Belmont Merchants Association For 25 years, she was in charge of many social functions at her church. She taught Sunday School for 64 years and was in charge of the Missions for many years and sang in the choir and participated in all church activities There are no words to describe how much she will be missed by her family and friends. Cremation, Montgomery & Steward Crematorium. Memorial service, 11 a.m. Saturday, Feb. 25, 2017, in the Montgomery & Steward Chapel. In lieu of food and flowers, donations may be made direct to Sangre de Cristo Hospice, 1207 Pueblo Blvd. Way, Pueblo, CO 81005. Complete obituary and online condolences at www.MontgomerySteward.com