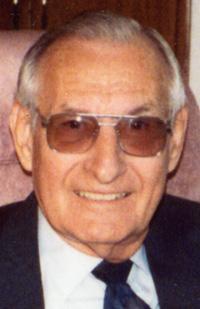 Max Quinter Davis, 88, passed away July 11, 2004. Survived by his wife, Erline Davis; daughter, Margaret Anne Brubaker of Colorado Springs; stepchildren, Gary Ives and Sondra Jantz, both of Cimarron, Kansas; brother, Ronald Davis of Ontario, Calif.; grandchildren, Vicki Lord, Scott Brubaker and Christy Mearns; great-grandchildren, Kaitlyn Lord and Hayley Brubaker; numerous step-grand and great-grandchildren. Preceded in death by his first wife, Hazel Davis; second wife, Bernita Davis; and brothers, Lyle and Harold Davis. Max was born to Quinter and May Davis on July 30, 1915, in Sabetha, Kan. He served in the U.S. Navy as a naval photographer during WWII. He was the manager of S.H. Kress in Pueblo from 1952 until 1962 Then became a realtor for Haver-Leach Company and worked at Isabelle's Dress Shop. Max was very active in the Pueblo community as a member and deacon of First Presbyterian Church, 32nd Degree Mason, on the Presbyterian Towers Board, received the first Others Award from Pueblo Salvation Army and member of Lions Club. There will be no viewing and a private interment will be held prior to the service. Memorial service will be held 2 p.m. Wednesday, July 14, 2004, at First Presbyterian Church, 220 W. 10th, with the Reverend Dr. Brad Munroe officiating. Those who desire may make memorials to First Presbyterian Memorial Fund or Salvation Army. Online condolences, www.montgomerysteward.com