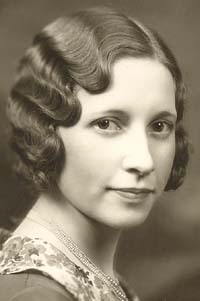 Maudie Mae Ernst, 104, died in Pueblo, Colo., on May 23, 2008, Survived by her daughter, Janet (John) Anderson of Pueblo; grandchildren, Kent Ernst (Elaine) Anderson of Portland. Ore., Lynn Renee Anderson of Denver; great-grandchildren, Ciara O'Flynn Anderson and Ian O'Flynn Anderson both of Portland, Ore.; and numerous nieces and nephews. Preceded in death by her husband, Dale R. Ernst; sisters, Elma (John) Fuller, Flossie (Llewellyn) Leavell, and brother, John (Leah) White. Maudie was born on January 5, 1904, in Lyon County, Kansas to Schuyler Colfax and Myrtle Porter White. She grew up near Emporia, Kansas. She was married Dale on Sept. 5, 1926, in Emporia. They moved to La Junta, Colo. in February 1941. She was a longtime member of Saint Andrews Episcopal Church in La Junta and was a member of the church Alter Guild. Maudie was a wonderful and caring wife, mother and grandmother. She was an avid bridge player. Maudie enjoyed entertaining and cooking for her family and friends, and was accomplished at fine needle work. She was a member of Lambda Alpha Lambda Sorority. At her request, there will be no viewing. Cremation, Montgomery & Steward Crematorium. Private services will be held at a later date. Those who desire may make memorials to Sangre de Cristo Hospice, through Montgomery & Steward Funeral Directors, 1317 N. Main St., Pueblo, Colo. 81003. Online condolences, MontgomerySteward.com