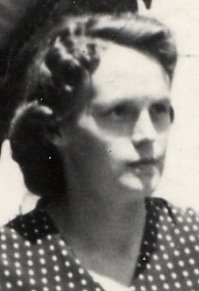 Mary M. Bruce was born on June 5, 1921, in Pueblo, the night of the great Pueblo flood, and passed away on February 6, 2005, in Dallas, Texas. She was the daughter of Ed and Nell Hausman. Her husband of nearly 40 years, Bill, preceded her in death. She is survived by sons, John (Margy) Veatch and Dan (Lorene) Veatch and daughter, Lynette Brewer; grandchildren, Katie Dziminski, Mike Veatch, Roberta McCarty, Stephanie Veatch, Tom Veatch, Kristi DeWitt, Jack, Chris, Andy and Marc Brewer; 17 great-grandchildren; brother, Clem (Marge) Hausman; sister, Justine (Harvey) Laughead; and numerous nephews and nieces. Three brothers, Edward, George and Tom Hausman also preceded her in death. Mary was employed at Triplex for over 20 years as a tool and gage setter and served as secretary of the local chapter of the United Steelworkers of America. She began working to support her children after her husband, Jack Veatch, was killed in an accident in 1943. She had a wonderful sense of humor that her friends and family enjoyed and will remember. Viewing at the funeral home Thursday from 10 a.m. to 6 p.m. Rosary, 6 p.m. Thursday, Feb. 10, 2005, in the Montgomery & Steward Chapel and Funeral Mass, 10 a.m. Friday, Feb.11, 2005, at Holy Family Catholic Church. Interment will follow at Roselawn Cemetery. In lieu of flowers, the family requests Masses or contributions to Holy Family Catholic Church, 2827 Lakeview, Pueblo, 81005. Online condolences, www.montgomerysteward.com