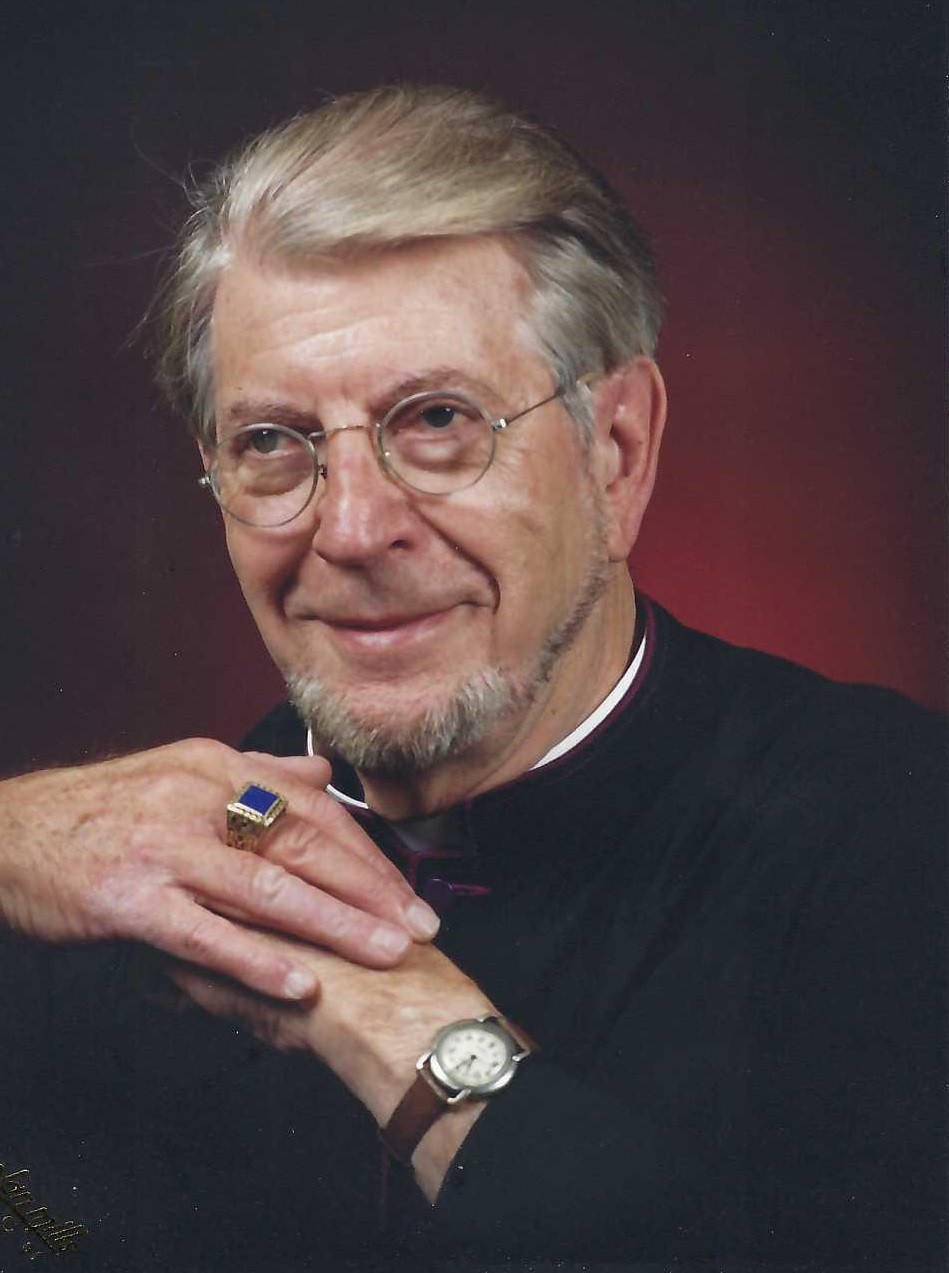 Monsignor Marvin J. Kapushion was born April 18, 1930, in Crested Butte, Colo., the third child of George and Anna (Matkovich) Kapushion. He died just a few days short of his 90th birthday, on April 7, 2020, at his residence at the Bonaventure of Pueblo after more than a half century of priestly life in the Diocese of Pueblo.
After attending elementary school in Crested Butte, he moved to Grand Junction to live with his sister and brother-in-law, Jake and Helen Spehar, in order to attend Grand Junction High School, graduating in 1948. Enrolling at St. Thomas Seminary in Denver, he was ordained a priest in June, 1956, in ceremonies at St. Joseph Parish in Grand Junction. His first assignment as assistant pastor at St. Joseph Parish in Salida was followed by a transfer to St. Francis Xavier Parish in Pueblo two years later.
The young Father Kapushion’s life changed dramatically in 1962 when Bishop Charles Buswell offered the opportunity to study for a Master’s degree in Social Work and run Catholic Charities for the Diocese of Pueblo. After completing graduate studies in 1964 at the Catholic University of America in Washington, D.C., he began more than three decades of service as director of Catholic Charities, Social Services of Pueblo-United and successor affiliates. Upon retirement in 1999, he served on the agency’s board of directors and continued in his favorite role as a counselor.
Early in his time as director of Catholic Charities, he helped found the Community Organization Program to serve Pueblo’s minority communities with an emphasis on young people. As time evolved he became a state and national leader on social services issues, serving on the board of directors of the National Association of Social Workers, the National Council of Social Work Education and the National Commission on Accreditation for colleges with social work programs.
He was President of the Colorado Conference on Social Welfare, was appointed to the Colorado Comprehensive Health Planning Council and was a member of the Colorado Advisory Committee for Youth and Children. In Pueblo, he served as chairman of the United Way Executive Directors.
While accomplishing much in his secondary profession, Monsignor Kapushion remained at heart a parish priest. For more than 30 years he commuted to Rye to care for parishioners at St. Aloysius Church. In later years, he assisted at the St. Mary Corwin Chapel in Pueblo while also serving as chaplain for the Poor Clare Monastery of Our Heavenly Father.
He retired for a second time as chaplain at St. Therese Catholic School in Pueblo after also serving as principal at the request of Bishop Arthur Tafoya and on the school’s board of directors, finding true joy in his work with students there, always reminding them to believe in themselves because “God don’t make junk.”
He was an advocate for the underdog and a true shepherd, always there for anyone who needed counsel, guidance, and prayer and to minister to the lonely and the downtrodden. Before and during his several retirements, he volunteered for the Youth Offender System, at the Pueblo County Jail and the San Carlos Correctional Facility. As he once said, “In my spare time, I’m retired.”
Monsignor Kapushion was preceded in death by his parents; his beloved sister, Helen Spehar; his older brother, William Kapushion; and nephews, George and Timothy Spehar. He is survived by his sister-in-law, Irma Kapushion; nephews, Jim, Gerry and Tom Spehar, and Marvin Kapushion; as well as nieces, Marianne Mercado and Sheri Ochoa; and numerous grand-nephews and grand-nieces proud to call him “Uncle Marvin.”
The family would like to thank most of all the many caring friends in Pueblo and Rye whose help allowed Monsignor Kapushion to extend his ministries into his later years and also Bishop Daniel Berg, Monsignor Ed Nunez and Deacon Dan Leetch for their kind assistance and direction as health and memory issues evolved. We extend a special thank you to Gerry Spehar for his extraordinary efforts after being chosen by his uncle to shepherd his affairs during his final years.
Memorial Mass, 10:00 a.m. Thursday, July 22, 2021, at the Cathedral of the Sacred Heart, 11th & Grand Ave., Pueblo. Memorial Mass, 10:00 a.m. Tuesday, July 27, 2021, at St. Joseph Catholic Church, 230 N. 3rd, Grand Junction, Colorado. Interment will follow in the Mt. Calvary Section at Orchard Mesa Cemetery in Grand Junction, Colorado.
Memorials may be made to St. Therese Catholic School, 320 Goodnight Avenue, Pueblo, CO 81004. Those at the school and many others will remember Monsignor Kapushion’s frequent admonition to “Do the right thing at the right time for the right reason.” Online condolences, www.montgomerysteward.com