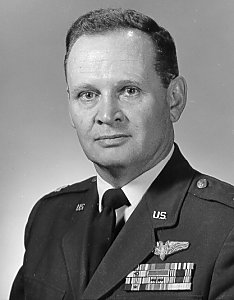 Lt. Col. Clarence Ray Roper, USAF (Ret.), 78, was a long-time resident of Pueblo and Colorado Springs, where he died on February 16, 2000, at St. Francis Hospital. He was born on October 1, 1921, at Nepesta, east of Pueblo, and grew up on the Roper family ranch at Goodpasture. Roper attended Pueblo schools and graduated from Central High School (1940), Pueblo Junior College (1942), and the American International College (1954). Drafted into the Army in 1942, Roper flew 43 combat missions as a B-24 waist gunner with the 'Jolly Rogers' 90th Bomb Group in New Guinea in 1943. He returned to Pueblo where he was a gunnery instructor at Pueblo Army Air Base until the war ended. He married Bette Simms, also of Pueblo, on April 13, 1946. As a reserve officer in the Air Force, Roper was recalled to active duty in 1951 and remained in service for another 26 years. Among his assignments, he served in the Air Force Weapons Plans Division (1961-65), the U.S. mission to Turkey (1965-67); Office of the Joint Chiefs of Staff (1968-1972); the Air Force Advisory Group, Vietnam (1972-73); and the North American Air Defense Command. He retired in Colorado Springs in 1977. Among his many commendations are the Distinguished Flying Cross (World War II), the Legion of Merit, and the Bronze Star (Vietnam). After retiring, Roper devoted himself to his family, gardening and love of history. He is survived by his wife, Bette Roper; three children, Robert R. (Jan) Roper of Denver, Dr. Susan Roper Dattilo of Colorado Springs, and Peter S. (Barbara) Roper of Pueblo; four grandchildren, Ryan, Ramie, Rebecca, and Nick; a sister, Ruth Roper Eden of Pueblo; and numerous relations. He will lie in state at the funeral home today from 10:00 a.m. until 5:00 p.m. and Sunday from 1:00 p.m. until 5:00 p.m. Funeral service will be held 11:00 a.m. Monday, February 21, 2000, at the Montgomery & Steward Chapel, with Reverend Ray Hawkins officiating. At the conclusion of the service, the family will receive friends and relatives at the Montgomery & Steward Reception Hall. Military honors by Pueblo Veterans Ritual Team and interment will follow at 2:00 p.m. at the Beulah Cemetery, Beulah, Colorado.