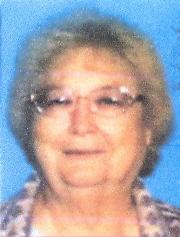 Louise Maxine Chaffee, 79, a Colorado native, was called to her heavenly home on August 2, 2011 surrounded by her loving family. Louise Maxine Chaffee was born in Ordway, Colo. on October 6, 1931, to John Ross and Flossie Ross. Her mother remarried Forrest Minium in 1939. Her stepfather adopted her the same year. Louise grew up on a full-working farm in Rulison, Colo. On her parents farm, she learned how to cook on a wood-burning stove and to churn butter from fresh cow's milk. She was very close to her uncle, Dee Woodall, who she grew up with. He taught her how to play marbles and was like a big brother to her. At a very early age, Louise learned how to read. At the age of six, she read 'Gone with the Wind' from cover to cover. Louise attended Rifle High School in 1944. Louise played the base drum for Rifle High band. October 4, 1948, she married the love of her life, Forrest Chaffee. They meet at the local Christian church in Rulison, Colo. Forrest Chaffee sang tenor for the church choir. Forrest and Louise enjoyed traveling together. They lived much of their married life in southern Calf. Louise was a labor and delivery nurse at Loma Linda Medical Center in Loma Linda, Calif. Forrest worked at Loma Linda Foods as a traffic manager for over 45 years. Forrest and Louise had 53 wonderful years together before he was called to his heavenly home in 2001. Her interests included spending time with her family, cooking and reading. She devoted much of her time using her God given gifts of caring for the needs of others. Louise was an eternal optimist. She made many friends where ever she lived. Louise suffered poor health after the death of her husband. She never let her illness affect her sense of humor. Louise's last year of life was lived at the Pueblo Villa. The Chaffee family would like to thank all the staff at the Pueblo Villa for taking such good care of Louise. She touched the lives of both residents and workers. She will be greatly missed. Louise leaves behind her Uncle Dee Woodall; her daughter, Michelle (Kurtis) Johnson and her beloved three grandsons. Memorial service will be held 3 p.m. Saturday, August 20, 2011, at Trinity Lutheran Church, 701 W. Evans Ave. Online condolences, MontgomerySteward.com