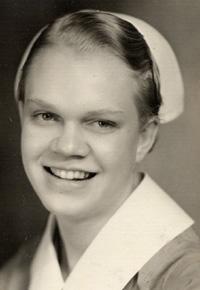 Louise Julia De Siata, 89, of Pueblo, Colorado, was born March 20, 1917, in Seymour, Indiana to Herman Bosse and Emma Schmidt Bosse, passed away May 22, 2006. In 1923, the family moved to Sheboygan, Wisconsin. Louise graduated from Sheboygan High School in 1935. After graduation she enrolled in nurses training at St. Mary Corwin Hospital in Pueblo. In 1941, she met and married Edward De Siata on April 20, 1941. They had two children, a daughter born in 1942 and a son born in 1945. Louise was a member of Trinity Lutheran Church where she was in charge of the Cradle Roll for many years. She was a member of the Altar Guild, Good Shepherd, Bible Study Groups and enjoyed quilting in the church basement on Wednesday mornings. She was also a member of Nurses Alumni. Survived by her husband of 65 years; children, Bud (Chris) De Siata of Pueblo and Margaret (Gary) Reimer of Meridian, Idaho; four grandchildren, Tim De Siata and Rod De Siata, Kathy (Joe) Blades and Rochelle (Randy) Angevine; nine great-grandchildren; sister-in-law, Agnes Kern of Pueblo; and numerous nieces, nephews and friends. Preceded in death by her parents; and sister, Margaret Williams. There will be no viewing. Cremation, Montgomery & Steward Crematorium. Memorial service, 2 p.m. Thursday, May 25, 2006, at Trinity Lutheran Church, 701 W. Evans, with Pastor Randy Bolt officiating. In lieu of food and flowers, memorials may be made to Trinity Lutheran Church direct or through Montgomery & Steward Funeral Directors, 1317 N. Main St., Pueblo, Colorado 81003. Online condolences, www.montgomerysteward.com *****