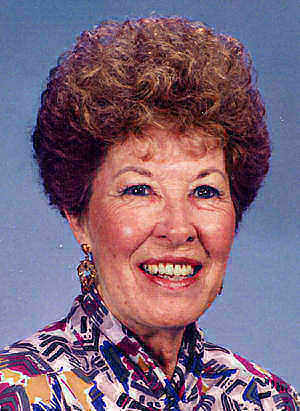 Louise Angela Formico passed away on Sept. 14, 2008, with her devoted husband and family by her side. Louise was born on Feb. 14, 1927, in Hawthorne, Calif. near the Pacific. She grew up loving the ocean, a love that remained with her throughout her life. Most of her childhood years, however, were spent far from the ocean in Rico, Colo. where her father moved the family as he searched for work in the years following the Great Depression. Although life was difficult, Louise always described her childhood as a wonderful time. She would often tell stories about the incredible western slope winters when children could actually climb out on to the roof of the house and slide off the edge into the huge banks of snow barely a few feet below. Upon the death of her father, her only remaining parent, Louise was sent to live with her elder brother and his family in Pueblo. She attended Centennial High School and graduated in 1945. She married Angelo Formico on June 7, 1947. For many years, Louise worked in the newly established Relay Center of the Colorado Fuel and Iron Corporation. She was a valued employee, and after her retirement from C.F. & I. in 1980, she was frequently called back to work to fill-in for absent or vacationing staff. Louise found great pleasure in the simple things in life: the panoramic beauty of the Colorado sky, beautiful music, a good book or a movie. She was a talented artist and seamstress, and an excellent cook. During difficult times, Louise graciously provided wonderful meals for family and friends. She also enjoyed occasional trips to the casinos in Cripple Creek, Colo. Her love and devotion to her husband, daughters, son-in-law, grandson and his wife brought her the greatest joy, and she never missed an opportunity to express this love to them. She was preceded in death by her parents, Ena and Andrew Heidt; an infant brother, Philip who fell victim to the Great Influenza Epidemic of 1919; her brother, Andrew Heidt, Jr.; and her sisters, Ann Ferando , Ena Rosemary Cassidy, Betty Krauss; her dearest friend Rowena VanSandt; her mother and father-in-law, Louise and Carl Formico; brothers and sister-in-law, Len Shern, Bill Boyett, Sr and his wife Dorothy, and Leo Danti. Louise is survived by her husband of 61 years, Angelo Formico; her daughters, Alisa Potestio and her husband Eddie of Pueblo, Carol Kirkwood of Laramie, Wyo.; her grandson Joshua Kirkwood and his wife Sabrina of Northglenn, Colo.; her sister, Emma Del Re of Pueblo; her sisters-in-law, Marie Shern and Loretta Danti; and numerous nieces, nephews and cousins throughout the United States, in Canada and Great Britain. Her family expresses their deepest appreciation and gratitude to Dr. Sloan and the gentle, caring staff at Sangre de Cristo Hospice House for kindnesses extended to Louise during her final days. Viewing from 10 a.m. to 7 p.m. Wednesday, Sept. 17, 2008, in the Montgomery & Steward Chapel with the family present from 3 p.m. to 7 p.m. Funeral mass will be held 10 a.m. Thursday, Sept. 18, 2008, at Shrine of St. Therese, 300 Goodnight, with the Rev. Fr. Liam Courtney as celebrant. Interment at Roselawn Cemetery. In lieu of food and flowers, memorials may be made to the Sangre de Cristo Hospice House through Montgomery & Steward Funeral Directors, 1317 N. Main St., Pueblo, Colo. 81003. Online condolences, www.montgomerysteward.com