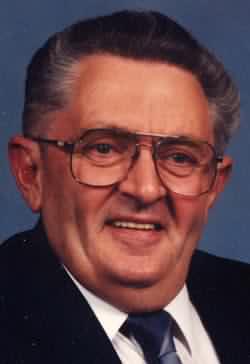 Louis J. Radloff, 71, of Pueblo, went to be with his Lord on January 31, 2003, after a long illness. He leaves to celebrate his life his loving family: his wife, Dee, of the family home; sons, Gary (Cathy)Radloff and Ted (Carla) Radloff, of Pueblo; daughter, Tammy (Dennis) Stueve of Canon City; step-children, Terri (Jeff) VanAuken and Marty McCabe, all of Pueblo, and Christy (Albert) Espinoza of Manhattan, Kansas; grandchildren, Amanda, Josh, Ryan, Haley, Shelly, Cindy, Leslie, Chad, Tony, Tamara, Amber and Brian; numerous great-grandchildren; sisters, Elsie and Esther; brothers, Elmer (Eve) and Lawrence; sisters-in-law, Dorothy Radloff and Dorothy Beach; brother-in-law, Paul, and numerous other relatives and friends. Preceded in death by his parents, Amalia and William Radloff; brothers, Carl and Rudy; sisters, Alma, Olenda, Ethel, Nelda and Leona. Louie was born August 17, 1931, in Logan, Kansas and has been a resident of Pueblo since 1955. He was employed by DR&GW Railroad, retiring after 35 years. He loved making stained glass creations and blessed many recipients with his work, which he continued until shortly before his passing. His love of people was only surpassed by people's respect and love for him. At his request, cremation, Montgomery & Steward Crematorium. Memorial service will be held Tuesday,February 4, 2003, at 11:00 A.M. at Trinity Life Center, 36 Merritt Court, with Rev. Richard Conley officiating. A potluck reception for family and friends will be held in the church fellowship hall following the service. Interment will be held at Logan Cemetery in Logan, Kansas.