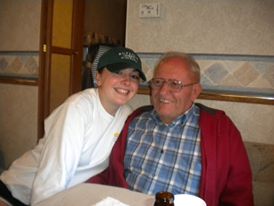 Lewis 'Dave' Rickwalt, 84, beloved husband, father, and papa, passed away on July 28, 2017. He was born on March 21, 1933, in Canon City, Colo. He was preceded in death by his wife of 55 years, Marjorie Dolan Rickwalt; his brother, Alan Rickwalt; his sister, Evelyn James; and his parents, Lewis A. and Eunice Rickwalt. Survived by his loving daughters, Shelly (Bob) Moreschini, Elaine (Steve) Ivan, and Pam (Mike) Goggin; grandchildren, Megan (Jarid) Prowell, Marissa (Stephen) Van Patten, Jennifer and Trevor Ivan, David and Dylan Goggin; and great-grandchildren, Brooks Curtis Van Patten and Thea Rose Prowell. He is also survived by his sister, Carole Shepherd; and numerous nieces, nephews, and cousins. Dave graduated from Centennial High School in the class of 1951. He served in the U.S. Army during the Korean War. He was a truck driver for many years and was the owner/operator of his own business, Rickwalt Trucking. He was a long-time member of the Fraternal Order of Eagles Aerie #145. Dave loved the outdoors and enjoyed fishing, hunting, camping, snow and water skiing, and boating with friends and family at the Minnequa Club. He was proud of his German heritage and loved to dance. The wonderful friends and neighbors in Sunset Park and especially on Stanford Avenue, where he had lived since 1959, were very special to him. The family would like to express their sincere appreciation to all the friends who visited him and the caregivers who helped to make his life so much better during these last years of his life. Special thanks to the staff at Brookdale El Camino Assisted Living Center, Parkview Medical Center, and Joni Fair Hospice House. Graveside service, 11 a.m. Friday, Aug. 4, at Imperial Memorial Gardens in Pueblo followed by lunch in the reception hall. In lieu of flowers, please consider a donation to Joni Fair Hospice House or a charity of your choice through Montgomery & Steward Funeral Directors, 1317 N. Main St., Pueblo, CO 81003. Online condolences at www.montgomerysteward.com.