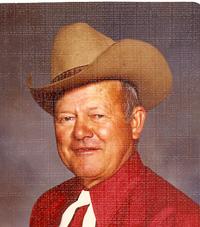 LaVoy William Schmidt, born in Walsenburg, Colorado, on December 23, 1925, to William Henry and Minah Lee Schmidt, departed to be with his Lord on December 1, 2005, at the age of 79 years old. Born in Walsenburg, LaVoy spent his childhood years in Gardner and Redwing, where his family ranched. His father left ranching and went into the mercantile business. In 1943, LaVoy enlisted in the U.S. Navy and was stationed in Hawthorne, Nevada. Discharged in 1947, he returned to the upper Huerfano valley and went to work at the Singing River Ranch. With the onset of the Korean Conflict, he re-enlisted in the U.S. Navy in 1950, and was stationed aboard the USS Sandoval. After refueling aircraft on the island of Kuajalean for a year and a half, he was stationed in Astoria, Oregon, as a butcher in the commissary store. There he met and married Edna Hale on December 20, 1953. In April 1954, after receiving word that he would be returned to sea duty, and a baby on the way, he chose family over the navy life he loved, and returned with his family to Gardner, Colo., where he worked with his father and stepmother in the Gardner Mercantile during which time their first child was born. A year and a half passed until LaVoy was hired by the United States Fish and Game Service as a Predatory Animal and Rodent Control Agent, (government trapper). The family moved to LaVeta, Colo., two more children were born and the family purchased their own home in 1960. LaVoy was an avid and expert trapper, hunter and fisherman. He loved the navy, he loved his job as a trapper, but family was always first. He loved to take the family fishing, camping, arrowhead hunting, pinon picking and anything else families could do together. He was very active in the community, in the 4-H program, in the P.T.A, V.F.W., worked as a La Veta park maintenance man for a time, helped with Rodeo Bible Camp and was known as the guy that gave away free vegetables out of his garden. He was honest, steadfast and his word was his bond, but you never heard him speak pridefully of his accomplishments or service. LaVoy was preceded in death by his father, William Henry Schmidt; mother, Minah Lee Weed; a sister, Lou Ann O'Neill; and a beloved cousin whom he loved as a brother, Joseph Schmidt. LaVoy is survived by his wife of 52 years, Edna Schmidt; two sons, Mickey (Malea) and Emit (Monica); and a daughter, Helen (James) Whitener; six grandchildren, Audrey (Chris) Knowles, Tyler Schmidt, Evan and Jessica Schmidt and Jalen and Andralyn Whitener; his sister, Avis (Kenneth) Dochow; stepmother, Millie Benson; and numerous nieces, nephews and cousins, all of whom he waits to see in the resurrection of life. The family will receive friends and relatives in the Montgomery & Steward Chapel from 4 to 6 p.m. Sunday. Also viewing at the church an hour prior to the service. Funeral service, 11 a.m. Monday, Dec. 5, 2005, at Mountain View Baptist Church, in La Veta, Colo., with Brother Bill Irwin officiating. Interment will follow at La Veta Cemetery. In lieu of flowers, memorials may be made to Frontier Hospice through Montgomery & Steward Funeral Directors, 1317 N. Main St., Pueblo, Colo. 81003. Online condolences, www.montgomerysteward.com