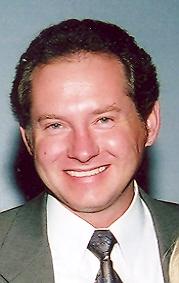 Joseph Paul 'Joe' Arnott, 43, of Pueblo, Colo., was born Dec. 21, 1963, in Pueblo, and died April 12, 2007. He was preceded in death by his brother, George Eugene Arnott, in 1982; and his grandparents, Bill and Mary Arnott and Norman and Bernadette Imblum. Joe is survived by his parents, Bill and Elaine Arnott of Pueblo; his former beloved wife, Tonya Shelton; siblings, Pat Arnott of Reno, NV, Dennis (Shelly) Arnott and Laurie (Ed) Krall of Pueblo, and Brian (Amy) Arnott of Fort Collins; nieces and nephews, Leanna, Christopher, Bridget, Jonathan and Bryson Arnott, and Elaina Rose Krall; his uncle, Norman Imblum; aunts, Mary Pat (Allan) Kaletsky, Lynne Richardson and La Quita Imblum; numerous cousins and friends. Joe enlisted in the U.S. Air Force to pursue an education in meteorology, and later was employed at the Pueblo Regional Center. Joe came into this world with a twinkle in his eye and a unique ability to do things differently than the rest of us. Born in a snow storm, he loved the weather all of his life. He often found humor in those mundane parts of life most of us tend to miss. He loved to study history and geology and to fly fish in mountain streams, especially near Crested Butte, Colo. We all enjoyed sitting around talking, reading poetry and telling stories of our lives. He was a sensitive soul with a kind heart. Joe truly loved his family and friends. He was a sensitive soul with a kind heart. Joe truly loved his family and friends. He was loved by those who knew him. His life will be remembered and our memories will be cherished. Recitation of the Rosary, 7 p.m. Tuesday, April 17, 2007, and funeral Mass, 10:30 a.m. Wednesday, April 18, 2007, with the Reverend Father Tom Adrians as celebrant. Both services at Christ The King Church, 1708 Horseshoe Dr. Interment will follow at Roselawn Cemetery. Memorials may be made in his memory to The Compassionate Friends, support group for bereaved parents, P.O. Box 11552, Pueblo, Colo. 81001. Online condolences, www.montgomerysteward.com