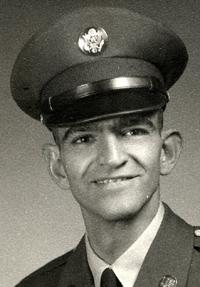 Joseph Donald Gene Vinci, 68, of Pueblo, Colo., passed away Tuesday, April 17, 2007, after a brief illness. Survived by his loving wife of 40 years, Pat Vinci, of the family home; daughter, Cheri (Rick) Haling of Pueblo; sons, T.J. Vinci of Rye, Colo., Daniel Vinci of Grand Prairie, Texas and Aaron Grace of Pueblo; sister, Bernadine Mahoney of Pueblo; seven grandchildren; numerous aunts, uncles, nieces, nephews, brothers and sisters-in-law; and many special friends. Preceded in death by his parents, Ben and Nettie Vinci; grandparents and numerous aunts, uncles cousins and other relatives. Joe served in the U.S. Army. He then worked for CF&I Steel for 22 years, retiring in June of 1986, and most recently worked for Centa Farms. Joe enjoyed playing and watching baseball, golfing and bowling. He also enjoyed watching the Denver Broncos and had an extensive movie collection. He was loved by everyone who was fortunate enough to have crossed paths with him throughout his life. Special friends include Louie Blagg, Emma Delre, David and Linda Centa and David Jordan as well as many others too numerous to mention. As per his request, there will be no viewing or service. Cremation, Montgomery & Steward Crematorium. In lieu of food and flowers, donations in memory of Joe may be made to Sangre de Cristo Hospice House through Montgomery & Steward Funeral Directors, 1317 N. Main Street, Pueblo, Colo. 81003. We would like to extend our special thanks to the entire nursing staff and family services workers at Sangre de Cristo Hospice for the special care they gave Joe while he was at hospice as well as the outpatient staff who cared for him after he went home from hospice. Online condolences, MontgomerySteward.com