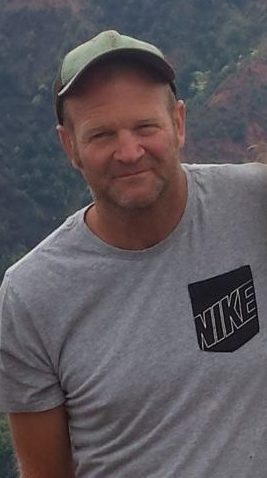 Jonathan H. Pranger, 55, passed away quietly on April 5, 2020 after a determined battle with stomach cancer.

He is missed by those who have survived him – his wife, Kimberly D. Pranger; mother, JoAnn (Brummel) Pranger; sisters, Gail (Joe) Shore and Pamela (Loren) Visser; brother, Daniel (Joan) Pranger; sister, Rachael Hoekstra; many nieces and nephews; and his wife’s extended family.  He was preceded in death by his father, Raphael Pranger; and brother-in-law, James A Hoekstra.

Jon was born to Raphael and JoAnn Pranger on April 4, 1965, in Denver, Colorado. He proudly contributed to the Denver metro area landscape as a masonry foreman for Glover Masonry. When not working, he enjoyed the friendships and thrills of white-water kayaking, volley ball tournaments and soccer games and often trekked to the top of many of Colorado’s most significant mountain peaks where he fell in awe at the work of his creator-God.  In 1993, Jon went on an expedition to the peak of Mt. McKinley.  In his journal from that trek he wrote:  “A bad day in a blizzard is better than a good day working.”  He also contributed to the fight against global warming by designing and building low energy, sustainable housing.

A memorial service will be held in his honor. The date and time to be determined. In support of Jon’s passion for conservation of the environment, donations may be made in his name to: The Nature Conservancy, 4245 North Fairfax Drive, Suite 100, Arlington, Virginia 22203-1606 or https://support.nature.org/site/Donation

Please visit https://www.youtube.com/watch?v=IUwZbOw_XMo to see a video of Jonathan’s photographs.