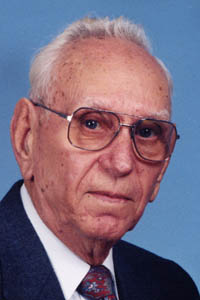 John Schmidt, 90, passed away February 13, 2005, in Pueblo, Colorado. Survived by his sister, Amelia Nutt of Pueblo; numerous nieces and nephews. Preceded in death by his wife, Leota Fern Schmidt on Sept. 30, 1999; one brother and five sisters. John was born March 21, 1914, to Peter and Mary Schmidt near Ft. Cobb, Okla. and John moved to Colorado in 1932. He served in the U.S. Army during World War II with the Battery B 225 Field Artillery Battalion and was employed by the Pueblo Army Depot until his retirement in 1971. John was a member of First United Methodist Church. He and Leota enjoyed their many vacation trips together, especially when they traveled to Hawaii and the Caribbean. Graveside service will be held 2 p.m. Tuesday, February 22, 2005, at Roselawn Cemetery with Reverend Dr. Rick Calhoun officiating. In lieu of flowers, memorials may be made to First United Methodist Church c/o Montgomery & Steward Funeral Directors, 1317 N. Main St., Pueblo, CO 81003. Online condolences, www.montgomerysteward.com