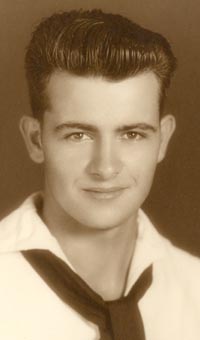 John Joseph Mastronardi, 82, of Pueblo, Colo., passed away Nov. 15, 2005. Survived by his wife of 59 years, Filomena 'Minnie' Mastronardi; children, Gary (Barbara) Mastronardi of Pueblo West and Patricia (Glen Ray) Carlson of Pueblo; sisters, Jennie Riley of Magna, Utah and Lucy Siggers of Florida; grandchildren, Sean Carlson, Joel (Abby) Kershaw and Jared Kershaw; cousins, James and Tony Di Iorio of Pueblo; and nephew, Mike Di Iorio. Preceded in death by his parents, Emedio and Josephine Mastronardi and brother, Tony Mastronardi. John was born Jan. 2, 1923, in Pueblo. He served in the U.S. Navy during WWII. John married Minnie Di Iorio on June 8, 1946, at Mt. Carmel Church. John retired from ABEX in 1984. He enjoyed gardening and was a Bronco fan. He volunteered at the Pueblo Soup Kitchen, District 60 soccer games and Dutch Clark Stadium. John's faith was very important to him; he enjoyed praying and attended daily Mass at Holy Family Church. He was a friend to all people and no one was a stranger to him. Member of Knights of Columbus No. 557, Fidelity and Protective Lodge, Eagles Aerie No. 145 and B.P.O. Elks No. 90, where he enjoyed playing pinochle. The family will receive friends and relatives from 2 to 4 p.m. Wednesday in the Montgomery & Steward Chapel. Rosary, 7 p.m. Thursday and funeral Mass, Friday at 2 p.m. with the Reverend Father Ben Bacino as celebrant. Both services at Holy Family Church, 2827 Lakeview. Military honors by Pueblo Veterans' Ritual Team and interment will follow at Roselawn Cemetery. Thank you from the family to Westwind-Horizon Heights for going beyond the call of duty in the care of John. Those who desire may make memorials to Sangre de Cristo Hospice or Alzheimer's Association, through Montgomery & Steward Funeral Directors, 1317 N. Main St., Pueblo, Colo. 81003. Online condolences, www.montgomerysteward.com