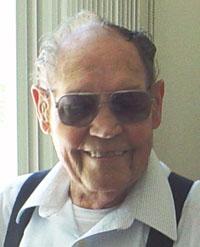 John B. LaForce, 1922-2005.John was born to John and Emma La Force in Oak Creek, Colorado on August 17th, 1922. John grew up in the Glenwood Springs vicinity until graduating from Glenwood High School in 1940. He served in the Army during WWII attached to the 119th Armored Engineers Battalion of the 12th Armored Division. John's transition to the civilian workforce followed his military career. He worked on the Hoover Dam project before returning to Colorado where he continued his career as a structural engineer. Building bridges was a lifelong passion for John, and many of his works still stand, as a testimony to his hard-working genius, all over Colorado, New Mexico, Arizona, and Utah. John retired in Durango, Colorado where he enjoyed life in his beautiful Animas Valley home, with his beloved wife Gert, for 20 years. The LaForces moved to Grand Junction in 1996, and then to Pueblo West in 2000. John was preceded in death by his father John B., his mother Emma Reib, sisters Wilma Cerise, Stella Rector, and Marge Blank, and son Ronald Engholm. His loving wife Gert of Pueblo West survives John, as do sons Mark and Curt LaForce of Denver, daughter Norma Hockman of Golden, Lee Bryson of Montrose, and Max Bryson of Raton, NM, 13 grandchildren, and 12 great-grandchildren. There will be a visitation from 10 a.m. to noon, Saturday, June 18th at Montgomery and Steward Chapel, 1317 North Main, in Pueblo. A celebration of John's life will be held at 4 p.m. Online condolences, www.montgomerysteward.com