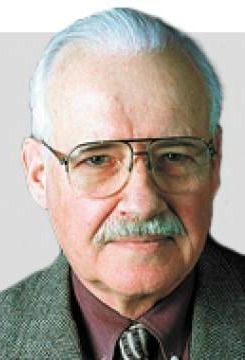 James Pierre Goullet Kenyon, born 83 years ago in Tulsa, Okla., died peacefully in a local hospital on Aug. 15, 2014. Pierre was best known, in recent years, for his insightful and careful reviews of musical and stage performances as published in The Pueblo Chieftain. Others knew him well from his own artistic contributions in the area of photography and his participation in both the Pueblo Chorale and the choir of Ascension Episcopal Church. Pierre is survived by two children, Hugo Peter Andre Kenyon and Elizabeth Ann Cornelius; by a grandson, Pierce Andreas Kenyon; by a brother, Hugo G.R. (Elizabeth) Kenyon and a sister, Marie K. Harrell (N. Marshall Meyers). Others who survive him include a niece, Merrill Kenyon (Edmund) Pilot and a nephew, Doug Kenyon; grandnieces, Lindsay and Nicole Pilot and Talon Kenyon; and caretaker, Pat Armijo. Pierre was preceded in death by his brother, Robert Gordon Blake Kenyon, and by his sister, Ann K. Morse. Born Aug. 4, 1931, to Hugo Alden Kenyon and Germaine Goullet, Pierre described himself modestly as 'a photographer, scribbler and dauber.' That self description could not embrace the wide world of experience lived by Pierre in his life and travels. He had resided in Pennsylvania, New York, Virginia, Washington, D.C, Trukee , Calif and concluded his life in Pueblo. Pierre had earned a degree in art history from Georgetown University in Washington, D.C. and had worked for a while at The New York Times. He was honorably discharged from the U.S. Army in 1962, having achieved the rank of second lieutenant in service that saw him assigned to Germany. Among Pierre's several, lifelong art interests were a fascination with photography and a special study of light on water, particularly at dusk. He was an avid student of the entire photographic process, the retention of color from the actual scene, to the film, to the computer and finally to the giclee or photographic print. He had once apprenticed under the French-American painter and poster-maker Andre Girard. Other interests and talents included painting, singing and writing. He loved music, and was able to sing that love and intellectualize it with a deep appreciation of classical music and opera. He served for a while on the Pueblo Symphony's board of directors and wrote program notes for the symphony's performances. Indeed, Pierre was also something of a writer, a wordsmith as he liked to call himself. He loved limericks and wrote — as he lived — with a wry sense of humor. He had produced a book of poetry titled 'Grace Falling Like Snow: Light & Heavy Verse.' In his waning years, Pierre was working to complete a presentation on the seven deadly sins, in prose and poetry. Pierre was a respected, kindly, faithful, gentle and intellectual man, with strong and well-reasoned opinions on a wide variety of topics that he was ready to share with, but never force upon, anyone who cared to dialogue with him. Cremation already has taken place at the Montgomery & Steward Crematorium. A memorial service will be held at 10 a.m. Saturday, Aug. 30, 2014 , at Ascension Episcopal Church, 420 W. 18th St. Online condolences may be recorded at www.montgomerysteward.com.