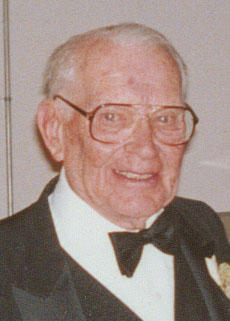 James Newell 'Swamp' Hall, Jr., 89, passed away April 5, 2010. Survived by his son, Dr. James N. (Nancy) Hall, III of Sheridan, Wyo.; grandchildren, Gretchen K. (Peter Solomon) Hall and Alberta S.(Douglas) Utech; and great-grandchildren, Sadie O. and Eliza B. Solomon. Preceded in death by his wife, Joan Roma Hall on July 20, 2001; and his parents, James N. and Theresia B. Hall. Newell was born June 9, 1920, in Denver, Colo. He graduated from Centennial High School in 1938, graduated from Pueblo Junior College in 1940 and received his bachelor's degree from the University of Wyoming in 1942, majoring in journalism and a minor in economics and political science. He served in the U.S. Navy during WWII; entering as Chief Specialist, Athletics, commissioned as Ensign, and served in Armed Guard as a commanding officer of naval gun crew on merchant ship. Newell started his long and fulfilling career in charge of personnel and student services at Sprayberry Academy of Radio, a large correspondence school; worked for many years at Sam Jones Insurance Agency, culminating as president and chairman of the board; president and chairman of the board of Premium Finance Company; president of School District #60 and Pueblo Waterworks Insurance Committees; president of Title Building Corporation from 1970 to 1984; and consultant with Centennial Agency from 1984 to 2001. Newell was an avid sports fan. In college he was on the track, football and baseball teams. He coached and was athletic director at various US Navy stations. He officiated at high school and college football and basketball games for more than 25 years. Past president of Pueblo Study Group and Colorado Football Officials; vice president of State Group for four years; life member of International Association of approved Basketball Officials; charter member , past president and member of the Executive Committee of the All- State Games committee, which was responsible for the annual Colorado coaches clinic and All-State Football and Basketball games. He was also past chairman and trustee of Al Kaly Temple's annual football game for crippled children. In 1977, he was elected as the first non-active coach to the Colorado Coaches Hall of Fame. He was president and chairman of Pueblo Stadium Expansion Inc., now Dutch Clark Stadium, and was elected into the Greater Pueblo Sports Hall of Fame. He was a life member of Sigma Chi Fraternity at the University of Wyoming, Pueblo Lodge #17 A.F. & A. M., Southern Colorado Consistory, potentate in 1984 of Al Kaly Shrine Temple, director of Pueblo Court #110, Royal Order of Jesters and Tong #8 of the Mandarins. He was an active member and many times board member of many other civic and service organizations in Pueblo. At his request, there will be no viewing or services. Cremation, Montgomery & Steward Crematorium. Online condolences, MontgomerySteward.com