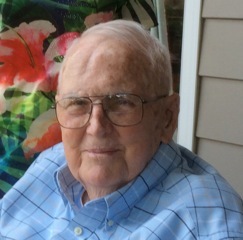 James A. Pickering ended his earthly journey victoriously and is now enjoying his new life, healed and whole, in heaven with Christ Jesus, his Lord and Savior, and with the love of his life, Betty. Jim passed on September 6, 2014, at the age of 92 at the Bruce McCandless State Veterans Home in Florence, Colo. He was born on March 12, 1922, in Douglas, Wyo. to James A. Pickering Sr. and Susie Laura (Rockwell) Pickering. Jim married Elizabeth (Betty Jo) Williams of Pueblo on July 21, 1943, while he was serving in the US Army. He was a loving and devoted husband until she passed on Feb. 25, 2004, after 60 years of marriage. Jim was a patient, loving father and a very proud grandpa. As a child, Jim resided on the Morton Ranch in Douglas Wyo. until the family moved to Ordway Colo. in 1932, and then to Pueblo in 1938. He graduated from Central High School in 1939, and attended PJC (Pueblo Jr. College) for almost two years until he began working at the CF&I main offices. In February 1943, he entered the U.S. Army, attended OCS in Brisbane, Australia, and proudly served rising to 1st LT with the 414th Corp of Engineers. He was wounded in New Guinea after 5 ½ months in combat and returned home on a hospital ship with shrapnel in his head which affected him all his life. He received disability retirement and the Purple Heart among other awards from the Army. Despite such injuries, he never considered himself disabled and had a successful 32 year career with the Equitable Life Assurance Society, providing his family with many special vacations and great times together. He retired in 1980. His family and church lives were faithfully integrated as he and Betty served generously for years at both Lake Ave. Baptist Church and First Baptist Church. He was devoted to his God and enjoyed Bible study even to his last weeks. He was a Charter Member of the Pueblo Lion's Club (usually selling the second highest number of tickets to the annual pancake breakfasts) and served selflessly for many years at the Cooperative Care Center. Jim and Betty also loved spending time at their cabin in Rye, enjoying many friends on the Lane, the creek and all the critters, keeping their well pampered poodles out of harm's way. He was active in the Greenwood Water Association, being involved with the water board and system from its inception. Over the years Jim enjoyed golf, his new cars, Army reunions, reading, and watching the Broncos, even keeping handwritten stats since their first year. He never met a dessert he didn't like. After his beloved Betty passed in 2004, Jim remained in their house on Prairie for a year, after which he moved to the Villa Towers. He was content in his apartment and enjoyed the lovely views from its balcony. He prided himself on knowing the names of everyone and was very active in Villa activities, including serving on the Foundation and Residents' council. The staff and friends at the Villa made his eight years there very pleasant. In December 2013, Jim moved to assisted living at the Primrose Retirement Community where he was happy and well cared for. When he was unable to remain in assisted living, he moved to the Bruce McCandless State Veterans Home in Florence in July where they respected and cared for him very well for the two months leading up to his passing. Everywhere he lived, the staff said they loved him for his quick smile, his sparkling blue eyes and his kind personality. Even as treatments hurt him, Jim always had a smile and a 'thank you' for his care givers. Jim was happiest when with his family and is survived by his daughters and sons-in-law: Cheryl and Joe Orazem of Pueblo West, and Pam and Dave Duran of Pueblo; grandchildren and spouses: Allison (Duran) and Mark Goss-Lara of Pueblo, Evan and Belicia Duran of Colorado Springs, Dena (Orazem) and Bret Romero of Parker, Colo; great granddaughters, Braetyn and Skylar Romero; and the first great-grandson due in December. Jim's siblings predeceasing him were Helen (Willis) Penaluna, and Catherine (Les) Parga both of Pueblo. He is survived by younger siblings, Edwin Charles Pickering of Denver and Mary Jane (Don) Sublette of Illinois. Also survived by many Rockwell family members and numerous nieces and nephews in Colorado, Illinois, and Pennsylvania. He really enjoyed being around Orazem and Duran family gatherings as well. Memorial service, 10 a.m. Tuesday, September 16, 2014, at First Baptist Church at 9th & Grand in Pueblo Colo. Private family inurnment with military honors, Mountain View Cemetery Columbarium.The family expresses their grateful appreciation to staff and care givers at the Villa Towers, Primrose Retirement Community, Parkview Hospital, Sharmar rehabilitation unit, and to the Bruce McCandless State Veterans Home. Many thanks also to Drs. Michael Rendler, Sumat Rawat, and Joseph McGarry. Memorial gifts may be made through the funeral home on Jim's behalf to the Wounded Warriors or the Cooperative Care Center of Pueblo. Online condolences, www.montgomerysteward.com