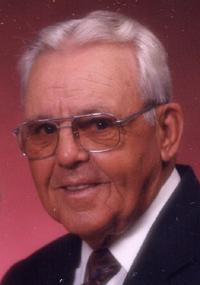 James 'Spank' Blasing, starting gun Jun. 2, 1922, finish line Jan. 15, 2007. Preceded in death by his wife of 54 years, Frances; parents, John and Letah Blasing; brothers, Mel, Kenny and Max; sister, Evelyn; brothers and sister in law, John and Helen Boles and Charles Walker COL USAF (Ret.). Survived by sons, Jack (Patti), Jim (Mary Ellen) Blasing; loving grandchildren, Debbie Brandenburg, Jaelee (Tony) Fetrow, Laura and Brock Blasing, Chandra (Jason) Almaraz, Matt Blasing; and the apples of his eyes, great-grandchildren, Karis and Mackenzie Blasing, Kalea Fetrow, Areyah and Sky Almaraz and baby Fetrow, expected in March. Also surviving are sisters in law, Dorothy Blasing, Norma Blasing and Lorine Walker; as well as numerous nieces and nephews. Spank was a veteran of World War II, serving in the Navy. He graduated from Trinidad Jr. College and Kansas State University and began his teaching and coaching career in Clifton and Chapman Kansas then joined the staff at Pueblo Junior College in 1956. Spank became a professor at the University's Physical Education Department. He was head Cross Country and Track Coach his entire career as well as Assistant Coach in football and basketball and served as Athletic Director in his later years at the University. During his lifetime Spank earned many Athletic and Professional Awards and was a member of the Greater Pueblo Sports Association Hall of Fame. After retirement, his years were spent traveling with his wife throughout the United States in their motor home, playing golf, bridge, fishing and playing with his grand and great-grandchildren. An honest man, 'grandad' was a person with immense integrity, who never stopped teaching and coaching his family, his many friends, neighbors and the 1, 000's of athletes and students he touched during his lifetime. He is going to be missed so much by his sons, their wives, grandchildren and great-grandchildren. Memorial service will be held 11 a.m. Saturday, Jan. 20, 2007, at Hoag Hall CSU -Pueblo with the Reverend Rob Clausen officiating followed by a reception. Per his request, interment will be a private affair for the family. The family would like to thank the staff at Sangre de Cristo Hospice and CSU Pueblo. In lieu of flowers, memorials may be made to the 'Spank' Blasing Memorial Scholarship Fund CSU- Pueblo or Sangre de Cristo Hospice through the funeral home. Online condolences, www.montgomerysteward.com *********