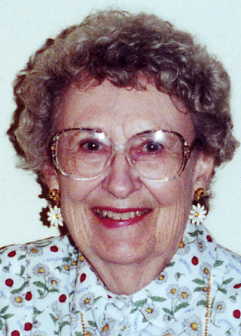 Jackie Weaver, a long time resident of Pueblo, died and entered her Lord's glory on Monday, August 25th, 2003, at her home. Jackie was born on May 28th, 1923, as Eleanor Jackson Leatherman to Daniel and Ruth Leatherman in Frederick, Maryland. She grew up in Jacksonville, Florida and Winchester, Virginia. She received her Bachelor of Science degree in chemistry and biology from James Madison College, now James Madison University, in Harrisonburg, Virginia in 1944. After working as a chemist in the New York City perfume industry, she married D.A. Weaver on September 8th , 1946, at the First Presbyterian Church in Winchester, Virginia. D.A.'s career took them to Dallas, State College and Pittsburgh, Pennsylvania, West Lafayette, Indiana, Chicago, Wausau, Wisconsin and Tucson They settled in Pueblo in 1978. Jackie will be forever remembered as a devoted, loving and gentle wife, mother, grandmother and friend. She was active in the Presbyterian Churches of Wausau and Pueblo, faithfully singing in both church choirs as well as serving in youth ministry. She was also involved with the Christian Women's Club, the Reach-for-Recover program of the American Cancer Society, and the Pueblo Kiwanis Club. She loved her many bible study friends and supported countless friends and family members through prayer. Survivors include her loving husband of 57 years, D.A. Weaver of Pueblo, her two daughters, Tia (Lael) Nielsen of Indianapolis and Dr. Jann Cather Weaver of St. Paul; her two sons, Jackson Dell (Susan) Weaver of Seattle and Gregory (Ann) Weaver of Eau Claire, Wisconsin. Also surviving her are 12 grandchildren, three foster children and an adopted child through the World Vision Ministries. She was preceded in death by her parents, and her sisters Virginia and Sarah. Memorials can be made to the First Presbyterian Church in Pueblo or the American Cancer Society through the funeral home. A memorial service, to celebrate and give thanks for her life, will be held 10 a.m. Friday, August 29th, 2003, at the First Presbyterian Church, 10th and Court, in Pueblo. Jackie touched many lives, more than she ever knew, and will be fondly remembered. Her warm smile, active faith in Jesus Christ, attentive service and genuine interest in others will be her legacy.